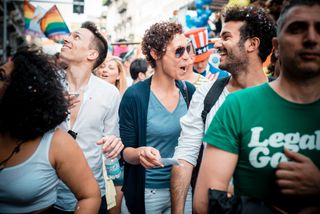 Heterosexual, homosexual, bisexual — these are terms with which most people are familiar, but they aren't the only sexual orientations that exist in today's world. Pansexual, a relatively new category of sexual identity, is characterized by physical or romantic attraction to others, regardless of their gender identity or biological sex.

Pansexuality — sometimes known as omnisexuality — is derived from the Greek prefix pan-, meaning "all." As such, pansexuals may be attracted to those of all biological sexes or gender identities — including men, women, those who don't identify with a specific sex or gender or those who are transsexual or transgender. This differentiates pansexuality from bisexuality, which denotes attraction to people of just two different sexes — male and female.

While the term "pansexual" is relatively new, its roots date back to the early 20th century and the work of famed psychoanalyst Sigmund Freud, who believed that all human behavior is motivated in one way or another by the sex instinct. He was criticized by his peers for this theory, which they dubbed "pansexualism." [5 Surprising Facts About Gay Conversion Therapy]

The term has since been reclaimed by those who wish to connote their recognition of the fluidity of gender and their belief that there are more than two genders.