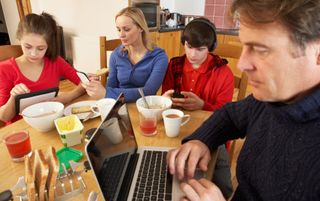 The average person in the United States will access 15.5 hours' worth of media a day by 2015, a new report suggests.

But that doesn't mean people are sitting in front of screens for all of their waking hours. Much of that increase is due to the rise of multitasking and the use of multiple media devices at once, said James Short, study author and researcher at the Center for Large-Scale Data Systems at the University of California San Diego.

As a result, some people are already accessing more than 24 hours of media content — just during leisure time — in a given day. All told, Americans are likely to log 1.7 trillion hours of media use a year by 2015, up from 1.3 trillion hours in 2008, scientists say. [7 Ways to Short-Circuit Kids' Mobile Addiction]

To calculate these staggering figures, Short and his colleagues compiled information from hundreds of sources, including Nielsen, Comscore (an Internet analytics company), the Bureau of Labor Statistics and corporate stock filings.

But some research suggests the time people are actually paying attention to media isn't rising nearly as dramatically as their media consumption.

As a result, it's easily possible for someone to log more than 24 hours of media use in a day, even if that only translates to several real hours of screen time.

Figuring out what people actually pay attention to is much trickier. Short's team is currently working on how to measure people's media attention, and it will probably include several measurement methods, possibly including gaze tracking, in-home observation, self-reports, he said.

Either way, he doesn't think there's any sign that the explosion in available media will taper off anytime soon.

"Most digital devices are eventually going to be always on," Short said.

Instead, people will need to rely on their own internal sense of when they've had enough.

Editor's Note: This story was corrected to update the author's affiliation and to clarify that there were no co-authors on the study.