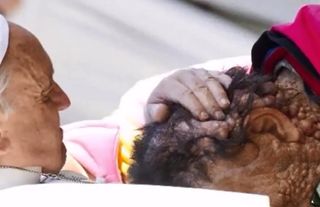 Since assuming the papacy, Pope Francis has espoused a life of humility and compassion in the tradition of his namesake, St. Francis of Assisi, who adopted a life of poverty and service to the sick.

On Wednesday (Nov. 6), the Pope demonstrated that commitment with stunning force as the world watched his general audience in St. Peter's Square. There, Francis openly embraced and kissed an unidentified man covered with tumors caused by neurofibromatosis, a rare genetic disease of the nervous system.

Neurofibromatosis, or NF, causes tumors to grow on nerves and nerve endings. The tumors are usually benign, but in some cases they may become malignant (cancerous), according to the National Institutes of Health.

The condition can appear in childhood or during the teen years, depending on the type of NF; symptoms include bone deformities, skin discoloration, bumps on or beneath the skin, hearing problems, poor balance, learning disabilities and severe pain. There is no cure for neurofibromatosis, though treatments, including pain medications and surgery, can help address some of the symptoms of the disease.

The Pope's simple act of tenderness has received considerable coverage by the news media. "The gesture is the latest in a series of actions by the Holy Father that have drawn attention for their warmth and affection towards the marginalized in society," the Catholic News Agency reported.