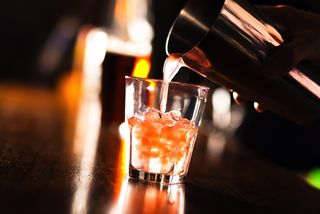 Studies of drinking alcohol together with energy drinks may not accurately state the health risks of the beverage combination, one researcher says.
(Image: © Mixed drink photo via Shutterstock)

However, precisely why this is the case has been a mystery. Doctors have attributed the association to multiple reasons, such as the malnutrition commonly seen among alcoholics, as well as myriad interactions between alcohol and hormones.

Now a team of researchers from Loyola University Medical Center in Maywood, Ill., has found how alcohol slows bone healing at a cellular and molecular level. This effect of poor bone healing, the researchers said, would apply to binge drinkers as well as alcoholics.

This problem can be particularly serious during the adolescent and young adult years, when the body is building stores of calcium in bones for long-term bone health. [7 Ways Alcohol Affects Your Health]

The researchers present their findings here yesterday (Oct. 6) at the American Society for Bone and Mineral Research 2013 Annual Meeting.

Alcohol abuse is a double-punch problem for bone health, explained Dr. Roman Natoli, an orthopedic surgery resident at Loyola's Stritch School of Medicine and lead presenter of the study.

Yet the occasional nip might be good for bone health. A study published in 2012 in the journal Menopause found that up to one drink a day could curb bone loss in women over age 50. And a 2008 study in the American Journal of Medicine found that people who consumed a half to one drink a day had a lower risk of hip fracture compared to both abstainers and alcoholics.

To better understand this complicated connection between alcohol and bone health, Natoli and his team turned to mice. The researchers divided ordinary lab mice into two groups, one exposed to alcohol levels about equivalent to three times the legal limit for driving, and a control group given no alcohol.

The researchers found differences between the control group and the alcohol-exposed group in the hard bony tissue that forms around the ends of a fractured bone, called the callus. In the mice exposed to alcohol, the callus was less mineralized, meaning not as much bone was forming. Moreover, the bone that did form was not as strong.

Also, the alcohol-exposed group had signs of oxidative stress, a process that produces chemicals called free radicals that, when at the wrong place at the wrong time, can impair normal cellular functions. Free radicals are highly chemically reactive.

Beyond this, the alcohol-exposed group had significantly lower levels of a protein called osteopontin. Osteopontin, along with a second protein called SDF-1, are involved in recruiting stem cells to the injury site. These stem cells mature into bone cells.

As a follow up to this study, Natoli said he is interested in injecting mice with bone stem cells with an antioxidant that combats oxidative stress called NAc, to see if that speeds up the healing process for mice exposed to alcohol.

Such treatment could help alcoholics, Natoli said. But the best advice for those mending a broken bone may be to pass on heavy drinking for a few months while the bone heals properly.