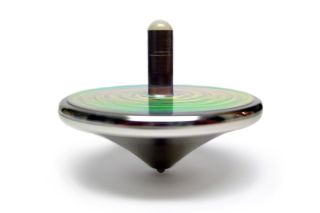 Scientists have created a microscopic sphere and set it awhirl at a blistering 600 million rotations per minute.

The sphere, which rotates 500,000 times faster than the average washing machine, is the fastest-spinning object ever made.

The findings, which were detailed today (Aug. 28) in the journal Nature Communications, could shed light on the physics of matter. [The 9 Biggest Unsolved Mysteries in Physics]

"This system poses fascinating questions with regard to thermodynamics and is a challenging system to model theoretically," study co-author Michael Mazilu, a physicist at the University of St. Andrews in Scotland, said in a statement. "The rotation rate is so fast that the angular acceleration at the sphere surface is 1 billion times that of gravity on the Earth surface — it's amazing that the centrifugal forces [the forces pushing outward due to circular motion] do not cause the sphere to disintegrate."

Very large objects obey classical rules of physics as laid out prior to the 20th century, whereas quantum theory describes the bizarre behavior of tiny subatomic particles. But at the boundary between the very small and the merely tiny, scientists aren't quite sure what happens.

To find out, researchers trap aggregations of atoms or molecules in a beam of light and try to spin them at incredibly fast rates in a vacuum. In theory, such an experiment could evaluate whether quantum friction, which could slow the motion of quantum particles even without any external sources of friction, truly exists.

Mazilu and his colleagues wanted to look at even bigger objects that contain more than a million atoms.

By changing the polarization, or orientation, of the light wave, the team was able to exert a tiny twist on the ball.

Without any air friction to slow down the ball, the team was able to accelerate the object to incredibly high rates, reaching 600 million rotations per minute (rpm) before it broke apart.

In addition, the object acted like a tiny gyroscope, stabilizing its motion as it wobbled, which had the effect of cooling the sphere to minus 387 degrees Fahrenheit (minus 233 degrees Celsius).

So far, the new experiment hasn't proven the existence of quantum friction, but follow-up studies could, the researchers said.