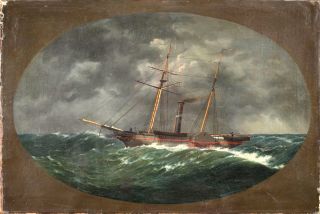 The Robert J. Walker, a steamer used to map the United States coastline, sank at sea on June 21, 1860 after a commercial vessel slammed into it.
(Image: © The Mariners' Museum, by W.A.K. Martin)

A 19th-century steamer that sank beneath the waves after a violent crash off the New Jersey coast has now been found.

The Robert J. Walker, a pre-Civil-War-era ship that surveyed the Gulf Coast, wrecked in 1860 after being struck by a commercial ship.

Divers discovered the shipwreck site in the 1970s, but the ship's identity has been shrouded in mystery until now. Scientists used the wreck's location and unique features to make the positive identification. [Civil War Shipwreck: Photos of the USS Monitor]

"Before this identification was made, the wreck was just an anonymous symbol on navigation charts," Rear Adm. Gerd Glang, director of National Oceanic and Atmospheric Administration's Office of Coast Survey, said in a statement. "Now, we can truly honor the 20 members of the crew and their final resting place. It will mark a profound sacrifice by the men who served during a remarkable time in our history."

With the Civil War looming, the Coast Survey stepped up its efforts to map harbors that would be strategically important during the war.

The Walker had just finished surveying the Gulf of Mexico and was sailing to New York on June 21, 1860, when a commercial schooner slammed into it about 10 miles (16 kilometers) off the New Jersey Coast. The ship sank in half an hour, and 20 of the 66 crewmembers died.

At the time, The New York Herald reported that a "heavy sea was running, and many of the men were doubtless washed off the spars and drowned from the mere exhaustion of holding on, while others were killed or stunned on rising to the surface by concussion with spars and other parts of the wreck."

Though a commercial fisherman found the wreckage of the Walker in 1970 about 85 feet (25 meters) below the surface, its identity wasn't known.

But in the past few years, wreck divers collaborated with NOAA researchers and maritime archaeologists to identify the ship. The team used sonar to map the dimensions of the ship, mapped the wreckage location and pored over historical records.

The wreck's location made it likely it was the Walker: It was even pointing toward Absecon Lighthouse in Atlantic City, N.J., where the ship was heading as it desperately tried to stay afloat.

Divers then spotted unique features, such as rectangular portholes and engines, that positively identified the ship.