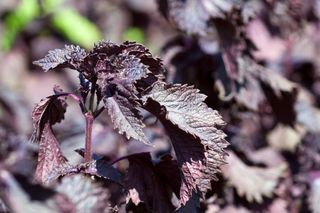 The beefsteak plant (Perilla frutescens) is one of many plants with purple leaves.
(Image: © Peter Radacsi | Shutterstock.com)

Most of the plants you see on a daily basis are green, but every so often you might happen upon the odd purple-leafed tree or shrub. Why do some plants have these purple parts?

The answer lies with another "P" word: pigment. Green plants contain a lot of the pigment chlorophyll. Because chlorophyll molecules are very good at soaking up blue and red light — but not so good at absorbing green light — plants containing a lot of chlorophyll appear green to the human eye.

Pigment is also behind a purple plant's vivid coloring. Plants that appear purple, blue or red contain a higher concentration of anthocyanin than chlorophyll. Anthocyanin is a pigment adept at absorbing green light, but less skilled at absorbing red, blue or purple light. [Early Earth Was Purple, Study Suggests]

Scientists believe that the purple leaves on some plants — like Persian shield, oyster plant and ornamental cabbage — may act as a natural "sunscreen," protecting the cells of the plant from too much light. Plants that experience too much sunlight can suffer from photoinhibition, a reduction in the plant's ability to carry out photosynthesis.

And because high levels of anthocyanin often appear together with high concentrations of poisonous phenols, it's possible that the purple leaves of some plants help ward off hungry herbivores.