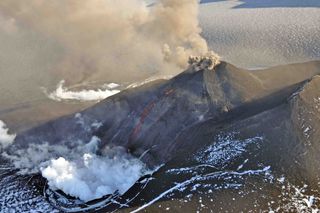 Photo of Veniaminof volcano taken by plane on Aug. 18, 2013, in the Aleutian Range in Southwest Alaska. This image shows a steam cloud from lava melting snow and ice and an ash cloud billowing from the summit.
(Image: © Game McGimsey, AVO/USGS)

A recent helicopter ride over an active volcano resulted in spectacular images of steam, lava and ash billowing from Alaska's Veniaminof volcano. The 8,225-foot-tall (2,507 meters) volcano has erupted on-and-off since June 13, melting snow and ice and strewing ash and volcanic debris across the summit.

On Aug. 18, geologists from the Alaska Volcano Observatory (AVO) and Dickinson College in Pennsylvania flew over the summit to survey the ongoing eruption. Photos taken during the flight show a cone built above the active volcanic vent inside Veniaminof's caldera, a giant crater formed during a massive eruption about 3,700 years ago. Steam rises from the foot of the cone, where streaming lava melts snow and ice. Ash rises in bursts from the vent, according to the AVO's Veniaminof report. The cone is about 1,080 feet (330 m) tall, the AVO said.

Dickinson College volcano expert Ben Edwards measured lava flow temperatures at Veniaminof during the helicopter flight. Edwards studies the interactions between lava and ice, and is tracking how fast the lava melts ice at the summit. He also plans to collects lava samples from near the volcanic cone.