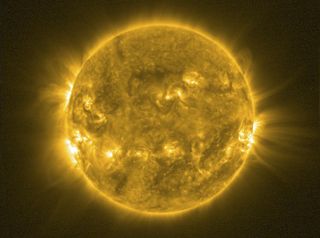 We have nothing to fear from the big change that is about to occur on the sun, researchers stress.

The sun's magnetic field is set to reverse its polarity in the next few months. But the shift won't spark an increase in powerful solar storms or other events that could have a damaging effect on Earth and its inhabitants, researchers say.

This polarity flip is perfectly normal solar behavior, occurring every 11 years at the peak of our star's activity cycle. But the field reversal doesn't drive the increase in solar flares and eruptions of superheated plasma, called coronal mass ejections, that is observed around solar max.

"It's more of an indicator than a causation kind of thing," said solar physicist Todd Hoeksema, director of Stanford's Wilcox Observatory.

From a human perspective, the effects of the field shift will likely be slight and primarily beneficial. For example, the polarity reversal will cause the "current sheet" — an enormous surface extending out from the solar equator on which the sun's rotating magnetic field has induced an electric current — to become much wavier.

This crinkled current sheet will provide a better barrier against galactic cosmic rays, high-energy particles that are accelerated to nearly the speed of light by faraway star explosions. Galactic cosmic rays can damage spacecraft and hurt orbiting astronauts, who don't enjoy the protection of Earth's thick atmosphere.

A drop in galactic cosmic ray levels could also have a subtle impact on weather here on Earth, researchers say.

"One of the things that helps clouds form and lightning to flash is cosmic-ray ionization of things in the Earth's atmosphere," Hoeksema told SPACE.com. "So when the cosmic-ray intensity is lower, it means you have fewer places where lightning will occur, and so the storms will probably be a little less intense."

He added, however, that "it's pretty much a speculative endeavor at this point, trying to link the cosmic rays to any real [weather] effect."

During the reversal, the sun's polar magnetic fields will weaken all the way down to zero, then bounce back with the opposite polarity. Researchers will keep a keen eye on just how strong this recovery is over the next two years or so.

"This field seems to be a good indicator of what the next solar cycle is going to do," said Dean Pesnell of NASA's Goddard Space Flight Center in Greenbelt, Md., project scientist for the space agency's Solar Dynamics Observatory spacecraft. "If it quickly goes to a high value, then that tells us the next cycle will be high."

The sun has been quiet during its current 11-year activity cycle, which is known as Solar Cycle 24. So it would be particularly interesting to see a strong field emerge after the impending flip, Pesnell said.