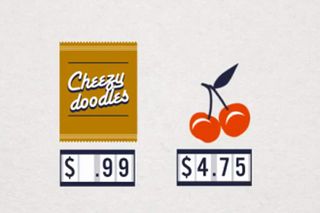 Elliott Negin is the director of news and commentary at the Union of Concerned Scientists (UCS). This article is adapted from one that appeared on the Huffington Post on Aug. 7, 2012. Negin contributed this article to LiveScience's Expert Voices: Op-Ed & Insights.

Heart disease, stroke and high blood pressure killed more than 750,000 Americans in 2011, the most recent year for data. And although there has been a steady decline in heart-related deaths since 1980, they still constitute nearly a third of all fatalities, making them the nation's No. 1 killer.

Many of those deaths can be attributed to what we eat. In other words, bite-by-bite, we're killing ourselves.

The price tag for treatment is enough to give you a heart attack. AHA predicts that over the next 20 years, the cost of cardiovascular medical care will triple from $273 billion in 2010 to $818 billion in 2030. It also will cost tens of billions more in lost productivity, which includes days missed from work and potential lost earnings due to premature death, jumping from $172 billion in 2010 to $276 billion in 2030.

The good news is there is a relatively straightforward way Americans can avoid heart-related diseases , prevent more than 127,000 deaths a year, and save some $17 billion annually in medical costs, according to a new Union of Concerned Scientists report, "The $11 Trillion Reward: How Simple Dietary Changes Can Save Lives and Money, and How We Get There."

How? Eat more fruits and vegetables.

That's right. If an apple a day keeps the doctor away, just think of what would happen if Americans ate as many as nine to 13 servings — 4.5 to 6.5 cups — of fruits and vegetables. The average American today only eats four to five servings a day. Joe and Jane Average should be eating nine, based on a 2,000 calorie-a-day intake, according to federal dietary guidelines. If everyone got with the program, UCS calculates the economic value of the 127,000 lives saved from cardiovascular diseases every year at a whopping $11 trillion.

Does nine servings a day sound like a heavy lift? Well, consider this: If Americans ate just one more serving a day — one banana or a large carrot — we would save $5 billion annually in health care expenditures and prevent more than 30,000 heart-related deaths.

Certainly there are other things we can do to protect our hearts. Cutting down on fatty meats and sugary soft drinks comes to mind. Getting off our butts would help, too. But three of the four AHA-endorsed diets — the Mediterranean-style diet, the DASH (Dietary Approaches to Stop Hypertension) Diet, and a low-fat vegetarian diet such as those developed by Dr. Dean Ornish and Robert Pritikin — recommend eating more fruits and veggies.

So what's stopping us, besides the fact that junk food is addictive?

Federal farm policies fork over hundreds of millions of dollars a year to subsidize commodity crops — mainly corn and soybeans — which are used for biofuels, livestock feed and the basic ingredients in processed food. At the same time, farm policies offer few incentives for farmers to grow fruits and vegetables, discouraging production of the very staples federal dietary guidelines recommend.

"These perverse policies make Americans foot the bill twice — once to subsidize commodity crops that wind up in junk food, and again to cover the skyrocketing cost of treating diet-related heart disease, stroke and hypertension," said Jeffrey O'Hara, an agricultural economist with UCS's Food and Environment Program and the author of the recent report. "Our federal food policy is literally making us sick and driving the economy further into debt."

Since 1995, the federal government has spent $19.2 billion to subsidize corn sweeteners, corn starch and soy oils — the building blocks of junk food — according to an annual report published by CALPIRG, "Apples to Twinkies 2013: Comparing Federal Subsidies for Fresh Produce and Junk Food." Apples are the only fruit or vegetable that benefits from a significant federal subsidy, the report found, but the $689 million apple growers received during the last 18 years is peanuts compared with commodity crop support.

The report used the high-calorie Twinkie as its emblematic junk food because 17 of its 37 ingredients — including corn syrup, high-fructose corn syrup, vegetable shortening and corn starch — are subsidized. Based on subsidy outlays, CALPIRG calculated that the federal government has spent enough for each of America's 144 million taxpayers to buy 355 Twinkies between 1995 and 2012 — nearly 20 a year. In comparison, apple subsidies during the same time period would cover the cost of only nine apples per person — about half an apple a year.

UCS's O'Hara offers two key recommendations in his report to address this problem. First, it's obvious that the United States needs to boost fruit and vegetable production. The sad fact is, if every American today decided to follow the federal dietary guidelines, the nation wouldn't have enough fruits and vegetables to meet the demand.

To increase supply, O'Hara says the federal government should spend more on agricultural research, specifically on plant-breeding programs that produce higher yields and create new, more resilient varieties. Research funding for fruit and vegetable crops pales in comparison with what corn, soy and other commodity crops get. Likewise, current U.S. farm policy prohibits commodity farmers who receive subsidies to plant fruits and vegetables, which makes no sense. And, unlike commodity farmers, many fruit and vegetable growers — especially those who grow a variety of crops — can't get adequate crop insurance, another major disincentive.

O'Hara's second recommendation focuses on doing a better job delivering that produce at an affordable cost to consumers, especially low-income Americans who are hardest hit by cardiovascular and other diet-related diseases. According to a 2012 U.S. Department of Agriculture study, some 30 million Americans are living in poor neighborhoods more than a mile from the nearest supermarket. O'Hara would like to see more public incentives for farmers markets, supermarkets, small grocery stores and distribution hubs for locally grown food, which would not only make fruits and vegetables more available, but also provide a market for regional fruit and vegetable farmers.

"We need smarter policies that invest in farmers markets, farm-to-school programs and other programs that would make fresh produce more available and affordable for low-income families," O'Hara says. "We need to start thinking about eating fruits and vegetables as an investment in public health. Smarter investments would improve public health and reduce the cost of health care at the same time."

In April, Sen. Sherrod Brown (D-Ohio) and Rep. Chellie Pingree (D-Maine) introduced identical bills in Congress that would expand consumer access to fruits, vegetables and other healthy foods and promote business and marketing opportunities for farmers and ranchers. Among other things, the legislation would provide $20 million annually for farmers markets and local and regional food enterprises to help defray the cost of processing, distribution, storage and marketing. It also would provide funding for the federal food stamp program, now called the Supplemental Nutrition Assistance Program (SNAP), to enable low-income consumers to buy healthy food from local farmers.

"The Brown-Pingree bill includes sensible, low-cost investments that would drag our antiquated farm policy into the 21st century by addressing one of our most pressing social problems," said O'Hara. "If Congress cares about saving lives, it will adopt the provisions of the Brown-Pingree bill in the upcoming farm bill."

This article was adapted from Eat Your Fruits and Veggies, Protect Your Heart, and Save Billions of Dollars in Health Care Costs, which first appeared on the Huffington Post. This is National Farmers Market Week, and UCS released "The $11 Trillion Reward" on Wednesday August 7 at the farmers market at New York's Mount Sinai Hospital.The views expressed are those of the author and do not necessarily reflect the views of the publisher.  This version of the article was originally published on LiveScience.com.