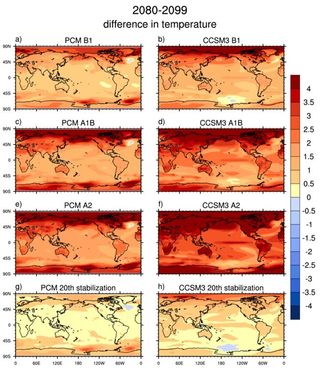 Predicted warming for the end of the century. Panels A-F involve low, medium and high carbon dioxide increases. Panels G and H are based on greenhouse gas concentrations stabilized as of 2000. Â© Science

A number of changes occurring among plants and animals point to unnatural climate change, many scientists say. [Full Story]

Reindeer are expected to disappear from large portions of their current range by the end of the century.

Marmots are ending their hibernations about three weeks earlier than they did 30 years ago.

North American Fowler's toads are breeding six days later than they did a decade ago.

Polar bears today are thinner and less healthy than those of 20 years ago.

Coral reefs around the world are predicted to increase by up to a third in size.

Elephant seal pups are leaner because their prey is migrating to cooler waters.

Loggerhead sea turtles are laying their eggs about 10 days earlier than they did 15 years ago.

Rising temperatures are influencing the sex of Hawkbill turtle hatchlings, with more females than males being born.

Many fish species are moving northward in search of cooler waters.

The diet of some songbirds are changing, with some avoiding insects that consume leaves exposed to high levels of carbon dioxide.

North American tree swallows are laying their eggs about nine days earlier than they did 40 years ago.

Common murres are breeding 24 days earlier than they did a decade ago.

Some plants are thriving in areas where their growth was limited before, thanks to temperature changes that provide more water, heat and sunlight.

American flowering plants like columbines and wild geraniums are blooming earlier than before.

A gene in the fruitfly Drosophila normally associated with hot, dry conditions has spread to populations living in traditionally cooler southern regions.

Surprising Side Effects of Global Warming

No Stopping it Now: Seas to Rise 4 Inches or More this Century

2005 Could Become Warmest on Record