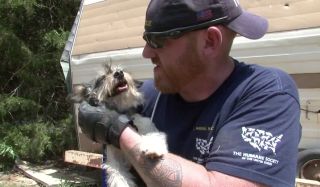 As our society makes continuing progress on animal welfare — exposing cruelty and creating social, corporate and public-policy standards — there's an inevitable backlash from industries that want to continue to do things the way they always have.

For example, I've written about the funded brand-attack on The HSUS by a hired gun whose resume is dominated by his work for alcohol, tobacco and animal-cruelty-dependent industries. I've also written about the amendment to the House of Representatives Farm Bill from Rep. Steve King (R-Iowa), which seeks to wipe out state laws that create standards or conditions for agriculture operations. And, in perhaps the biggest news story of the year, lawmakers in 11 states introduced measures to make it a crime, in one form or another, to conduct undercover investigations at agricultural operations — the so-called "ag-gag" proposals.

Meat-industry consultant and scientist Temple Grandin described ag-gag bills as "the stupidest thing that Ag ever did." The San Francisco Chronicle called the package of bills from agribusiness, "the worst PR gaffe since New Coke." And The HSUS would have to agree.

As controversy over the legislation raged in the states, newscasters repeatedly showed footage of past investigations, exposing the public to images of factory-farming abuses like extreme confinement in gestation crates — the industry must have viewed that as self-defeating. And, in a general sense, consumers were left with the impression that agribusiness interests had something to hide.

Last week, the North Carolina legislature adjourned without approving its version of an ag-gag bill. Similar bills failed in 10 other states. The most vigorous debate played out in Tennessee, where a bill narrowly skidded through the legislature, but it was ultimately vetoed by Governor Bill Haslam.

So, yes, it's a great outcome that The HSUS and its allies worked with upstanding lawmakers to block those bills this year. But, a half-dozen states approved similar measures in prior years, and these laws have had a chilling effect on whistleblowers and investigations. We are quite sure we haven't seen the last of those laws.

It should be a policy priority for lawmakers to protect animals from cruelty and to maintain strong food-safety standards. By treating investigations of cruelty and unsafe business practices as the problem, logic and common sense are turned on their heads. Such efforts protect scofflaws and people with something to hide, and do a disservice to the workings of a civil and transparent society.

Pacelle's most recent Op-Ed was Nearly 100 Animals Rescued from Squalor at Rural Homestead. This article first appeared as Ag-Gag Bills Bite the Dust on the HSUS blog A Humane Nation. The views expressed are those of the author and do not necessarily reflect the views of the publisher. This article was originally published on LiveScience.com.