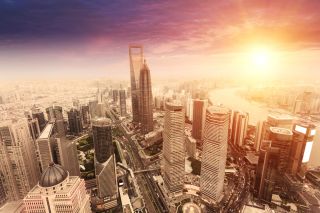 What is the largest building in the world?
(Image: © zhu difeng | Shutterstock.com)

In July 2013, China heralded the opening of the New Century Global Center, an immense 18.9-million-square-foot (1.75 million square meters) structure that many are calling the largest building in the world. But is the newest Chinese megastructure really the biggest building on Earth?

The New Century Global Center in Chengdu — replete with a pirate ship, 14 IMAX theaters and an indoor beach with its own artificial sunsets and sunrises — does in fact possess the most floor space of any building in the world. It's closely followed by the Dubai International Airport, which boasts 18.4 million square feet (1.71 million square m) of floor space.

But if you're measuring by sheer volume, then the award for world's largest building goes to the Boeing Everett Factory in Everett, Wash. This 4.3-million-square-foot (400,000 square meters) building might not sound as impressive as China's new behemoth, but with 472 million cubic feet (13 million cubic m) of usable space, this airplane assembly plant earns its place as the biggest building in the world.

Of course, square footage isn't the only way to measure a building's size. The tallest building in the world, for example, is Dubai's Burj Khalifa skyscraper, which boasts only 3.3 million square feet (306,000 square m) of floor space. But at 2,716 feet (828 m) tall, the Burj Khalifa stands over eight times taller than the New Century Global Center.

No list of giant buildings would be complete without the Aalsmeer Flower Auction, located in Aalsmeer, the Netherlands. At 10.6 million square feet (985,000 square m), the building that houses the largest flower auction in the world also has the world's largest footprint. Its single-story, open floor plan covers an area of 243 acres (98 hectares).

And St. Peter's Basilica in Vatican City is generally regarded as the largest church in the world at 216,744 square feet (20,000 square m), a number that seems particularly impressive considering that the church was built nearly 500 years ago.