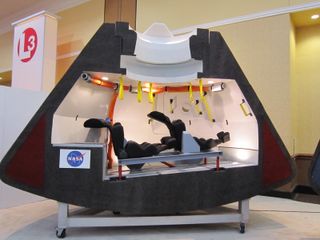 A model of Boeing's CST-100 space capsule shows the crew-carrying craft's interior design. The CST-100, which can carry up to seven astronauts, could fly its first manned mission by 2015 or 2016, Boeing officials have said.
(Image: © Denise Chow/SPACE.com)

COLORADO SPRINGS, Colo. — A full-size model of a new space capsule being built by Boeing to carry astronauts to the International Space Station offers a glimpse of how spaceflyers will be positioned inside the spacecraft.

The two cross-sections of Boeing's CST-100 capsule are being displayed here at the 28th National Space Symposium, which is being held from April 16 to 19 at The Broadmoor Hotel.

Boeing is building the CST-100 capsule as part of a NASA program that aims to foster the development of a new fleet of American spacecraft to carry astronauts to the space station. With the space shuttle program now retired, NASA is hoping commercial vehicles can soon begin ferrying cargo and then astronauts to and from the orbiting outpost.

The gumdrop-shaped capsule measures 14.5 feet (4.5 meters) across at its widest point, and will travel into orbit atop an Atlas 5 rocket. The spacecraft will be able to carry up to seven astronauts, with each capsule designed to fly to space and back 10 times, Boeing officials have said.