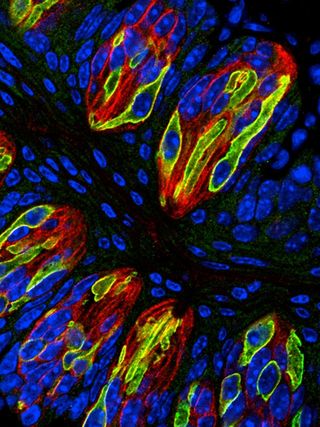 Our ears, nose, tongue and other sensory organs have cells equipped for detecting signals from the environment, such as sound waves, odors and tastes.

You can hear the phone ring because sound waves vibrate hairlike projections (called stereocilia) that extend from cells in your inner ear. This sends a message to your brain that says, "The phone is ringing." What's sending that signal is a channel protein that juts through a cell membrane. These pores let charged particles called ions pass through to trigger the release of neurotransmitters, chemical messages that are then communicated through the nervous system.

What about smells? When odor molecules hit the inside of your nose, they're received by receptor proteins on the surfaces of nerve cells. The odor message fits into a specially shaped site on the receptors, nudging the receptors to interact with highly specialized proteins on the inner surface of the nerve cell membrane. The proteins then change their own shape and split in two, which sets off a cascade of chemical reactions inside the cell. This results in an electrical message that travels from your nose to your brain, evoking a response to a pleasant or toxic odor.

Exactly how cells transmit information to the brain for certain tastes has been a mystery until recently. A team of investigators from nine institutions, including the Perelman School of Medicine at the University of Pennsylvania, discovered that an ion channel protein called CALHM1 enables the perception of sweet, bitter and savory tastes.

After a substance stimulates one of these taste types by binding to specialized receptors on the corresponding taste bud cells, CALHM1 lets energizing ATP molecules leave these cells and alert nearby neurons to continue the signal to the taste centers of the brain. So, the ion channel’s release of ATP lets us sense strawberries as being sweet, coffee as being bitter and bacon as being savory.

The researchers made this finding by studying mice that lack the CALHM1 protein. These mice treated sweeteners and bitter compounds as if they were water, implying they couldn’t discern the tastes. The researchers note that CALHM1 and its different forms could play a part in physiologically important ATP release elsewhere.

The Structures of Life Booklet

Exploring the Elusive World of Life’s Most Vital Proteins