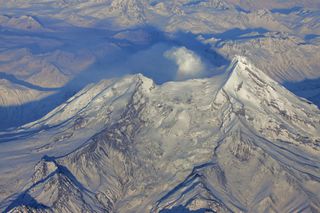 Alaska's Redoubt volcano during its 2009 eruption, with ash visible against the new snow and a cloud of volcanic gas and steam drifting to the northn.
(Image: © Scott Lawrence/Alaska Volcano Observatory)

Earthquakes can often signal an impending volcanic eruption, and sometimes before a mountain blows its lid, seismologists detect a continuous, rhythmic series of quakes known as a harmonic tremor.

One after the other, tiny temblors originate beneath a volcano, typically accompanied by a rumble that's at such a low frequency, humans would not be able to hear it. But the harmonic tremor that preceded the March 2009 eruption of Alaska's Mount Redoubt made the volcano "scream," the frequency got so high, researchers say.

A swarm of earthquakes — up to 30 per second — produced an unusually high-pitched racket at Redoubtand then an eerie silence before the peak was rocked by a series of six explosions, according to a pair of new studies.

"If you were on the volcano, you might hear a very soft, low bass rumble (just barely at the limit of human hearing) followed by about 30 seconds of silence and then the roar of the explosion," study researcher Alicia Hotovec-Ellis, a University of Washington doctoral student, explained in an email. [50 Amazing Volcano Facts]

Volcano monitoring stations around the mountain — located southwest of Anchorage in the Aleutian Islands — recorded low frequencies starting out around 1-to-5 hertz that built up to 30 hertz before the initial blast in 2009, according to the study. Anything lower than 20 hertz is considered infrasound, beyond the limits of normal human hearing.

This phenomenon has been documented at other volcanoes, but the building geological growl was always in the inaudible range. The Soufriere Hills volcano on the Caribbean island of Montserrat, for example, had a similar "scream" in the 1990s, though it only got up to a frequency of 3 hertz, said Hotovec-Ellis. That's even lower than the lowest infrasonic moans of elephants and blue whales.

Hotovec-Ellis and colleagues think that at Redoubt an unusually high number of little earthquakes caused the volcano's noisy hum. Their version of events looks like this: Magma was being pushed through a narrow, high-pressure channel into the heart of the mountain. The molten rock probably got stuck and then forced through this conduit in spurts. This friction between the channel walls and the magma resulted in small earthquakes (ranging in magnitude from about 0.5 to 1.5). As pressure built, the earthquakes occurred in a quickening sequence, up to a rate of 30 per second, and blended into a harmonic tremor. After a pause, the volcano finally blew its lid, with all that pressure is released in an eruption.

This new model is dubbed "frictional-faulting" in a study detailed in the journal Nature Geoscience. Redoubt's strange harmonic tremor is also described in the Journal of Volcanology and Geothermal Research.

While understanding this process doesn't offer much promise for forecasting volcanic eruptions, it could give scientists a valuable glimpse inside active volcanoes, Hotovec-Ellis said.

"It might be able to give a few minutes to hours of warning before the next explosion," Hotovec-Ellis wrote in an email. "I think the main utility at this point is in better understanding what's going on inside volcanoes when they erupt."