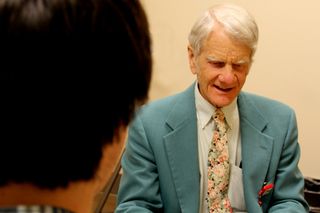 It's estimated that 13 million men, women and children in the United States fit the diagnosis for attention-deficit/hyperactivity disorder, better known as ADHD or ADD. A neurodevelopmental disorder characterized by inappropriate degrees of inattentiveness, impulsivity and/or hyperactivity, ADHD is the most common mental health issue in children, with 5 to 8 percent of them affected.

For decades, doctors have tried to understand the disorder . Studies suggest 50 to 80 percent of cases are traced to inheritable traits, but the inheritable trait may be a vulnerability to something in the environment. Now, my colleagues and I are beginning to explore environmental factors that may play a role in whether or not a child develops ADHD.

In a recent study led by Martijn Arns from the Research Institute Brainclinics in the Netherlands, and published in the journal Biological Psychiatry, my colleagues and I found that kids living in states with more sunshine have lower rates of ADHD. In some of the highest sunlight states, the ADHD rate is half that in states with the highest rate of ADHD.

For the study, we examined ADHD prevalence rates and solar-intensity maps for specific states. Solar intensity is a measure of how much sunlight a specific region receives. States such as California, Arizona and Colorado, as well as countries such as Spain and Mexico, have high solar intensity. Those regions had an ADHD diagnosis rate of around 5 to 6 percent. Other places, with a low solar-intensity rate, had a diagnosis rate of 10 to 12 percent — a 2-to-1 ratio.

There are many possible explanations for the study findings, but one may be that, in states with more sunlight , children may get out more to play. This is important because we know that exercise is good for brain function. Another possibility is vitamin D — produced during sun exposure — plays a role, although our study did not find evidence for that. Yet another explanation is the influence of bacteria, fungi and parasites that differ by climate.

My colleagues and I think the most likely factor for the findings is sleep deprivation resulting from disruption of the biological clock and circadian rhythm.

Patients with ADHD have some of the same symptoms — irritability, impulsiveness, inattentiveness — as sleep deprivation . What's robbing patients of sleep may be their computer and TV screens, which emit a blue light that could be delaying nightly production of melatonin (the hormone that helps regulate sleep) in their bodies.

As people use more electronic devices such as tablets and smartphones, the amount of sleep children get has decreased over the past couple of decades. The evening use of devices with a blue-light-emitting screen may cause delayed circadian rhythm and difficulty falling asleep.

The rates of ADHD may be lower in states with more sunshine because the intense sunlight strengthens the circadian rhythm and overrides the disrupting blue-light effect from TV and computer screens.

In my 40 years of child psychiatric research, I've seen many new advances that help us identify why people of all ages are suffering ADHD and other disorders. The value of the sunlight link is that it opens new vistas for doctors to explore possible prevention and treatment approaches.