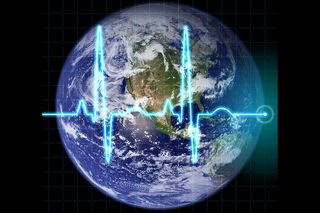 NEON will be the world’s first observatory to listen to the pulse of a continental ecosystem over multiple decades.
(Image: © NASA and Thinkstock (Design by National Science Foundation.))

But that is now changing, with the development of the long-awaited National Ecological Observatory Network (NEON). Once it is fully operational, NEON (still under construction but partially operational) will be a massive nationwide infrastructure for collecting and synthesizing standardized ecological data covering the entire U.S. over multiple decades.

NEON will enable scientists to generate the first apples-to-apples comparisons of long-term ecosystem health throughout large regions of the U.S. and the entire country. It will thereby help scientists produce precedent-setting analyses of the long-term impacts of major environmental threats, such as climate change, land use changes and invasive species.

NEON functions will be turned on incrementally throughout the U.S. until the entire infrastructure becomes fully operational in about 2017. After that, NEON will remain fully functional for some 30 more years, until about 2047.

Funded by the National Science Foundation, NEON is managed by NEON, Inc., a nonprofit corporation based in Boulder, Colo.

NEON: An EKG for the environment

With its geographically dispersed data collection components, NEON will be analogous to an EKG for the Earth: Just as an EKG produces snapshots of heart health based on measurements of heart activity from strategic locations on a patient's body, NEON will produce snapshots of ecosystem health based on measurements from strategic locations throughout the U.S.

NEON will also be used to study the ecological impacts of selected extreme events in the U.S., such as fires, droughts and hurricanes. As part of this effort, NEON is currently collaborating with Colorado State University on a precedent-setting, large-scale study of the impact on vegetation, water quality and other natural resources of the High Park Fire in Colorado. This wildfire, which was among of the largest and most destructive wildfires in Colorado history, occurred in 2012.

In the coming years, additional data collection locations will be added to NEON to represent other extreme events.

At each NEON location, ecological variables — including pollution levels, land use, the diversity of plant and animal species, the health and types of vegetation and soil conditions — will be captured through 639 unique ecological measurements. This data will be collected in a variety of ways: by trained field crews; sensors placed in soils, perched in towers and lodged in streams; and state-of-the-art, ultra-sensitive remote sensing instrumentation in Twin Otter airplanes.

This kind of concerted measurement activity hasn't been done before. What's more, because researchers will take all NEON measurements using the same procedures, the data will be comparable across time and space. These data will therefore offer unparalleled topical, temporal and spatial coverage.

NEON data will be continuously and simultaneously beamed over the Internet to computational, modeling and other resources located at NEON, Inc., and then synthesized into various high-level data products. These products as well as raw NEON data will be made freely available via NEON's Web portal to one and all.

Throughout NEON's lifetime, tens of thousands of researchers, educators, resource-managers, government organizations, students and members of the public will use its data. These users will incorporate NEON data into various types of analyses, including snapshots of the current state of the environment, as well as maps, explanations and predictions of the primary impacts of humans on the natural world.

Such resources will catapult forward the science of ecology as well as help improve public understanding of environmental change and promote science-based decision-making on natural resource issues.