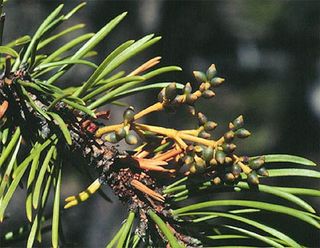 The green fruit of the dwarf mistletoe is not the only difference between it and its white fruit bearing Christmas relative. One fruit is or less than a quarter of an inch, or about 5 millimeters, long. Photo
(Image: © Cynthia Ross)

The dwarf mistletoe, a kissin' cousin to the variety hung from doorways at Christmas-time, is unique in its family both for its sexual habits and the level of destruction it causes within the forests where it resides.

This variety is the only truly parasitic member of the legendary plant family with new research revealing how it employs a pressurized water pump to shoot its seeds up to 65 feet (20 meters).

"The dwarf species I studied in Manitoba has a gestation period of one-and-a-half years, after which the seed blasts out of the fruit. This extreme buildup of water pressure as a seed dispersal system is rare in the plant world," Cynthia Ross, a biologist at the University College of the Cariboo in Kamloops , British Columbia , said.

Other mistletoes spread their seeds when birds eat and then deposit them on other trees, but Arceuthobium americanum does not wait for assistance. Instead it stores water within spring-shaped cells which act like catapults for the seeds when their casings are ready to explode, a tact that has been highly successful for the green fruited plant.

"These plants are extremely prolific and the explosive discharge mechanism assures that the seed is distanced from the source, but is not moved so far that it is unlikely to leave the stand of host conifers," said Ross.

The innovative reproduction ploy has helped make the dwarf mistletoe the most destructive pathogen to timber in North America, according to researchers.

The white fruit bearing Christmas mistletoe takes water and minerals from a tree, but the dwarf mistletoe also takes sugars and that drain on the trees resources leaves them more susceptible to outside assault.

"The dwarf mistletoes reduce growth rates, both in height and diameter, they reduce seed and cone crops, they lower wood quality, and they predispose infected trees to attack by bark beetles and fungi," Ross said. "It is the attack by insects and fungi that typically lead to tree death."

The details of the reproductive intricacies of the dwarf mistletoe are printed in the December issue of the Canadian Journal of Botany, and Ross hopes understanding the mistletoe's sex life could help control the parasite more effectively.

"We could potentially target the unusual characteristics of dwarf mistletoe reproduction in disease control, either at the pollination or seed dispersal stages," Ross said. "Neighboring plants, thanks to their more mundane sex life, would likely be safe from whatever we use to kill the pathogen."