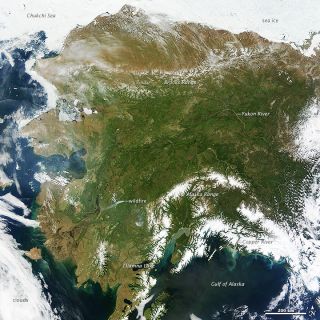 From steaming volcanoes to sparkling lakes, almost all of Alaska's marvelous landscapes simmered under hours and hours of sunlight Monday (June 17), as seen by a NASA satellite.

A scorching Alaskan heat wave caused by a high-pressure system meant few clouds on Monday, so NASA's Terra satellite snapped a rare image of the entire state. The view is similar to spotting the entire United States east of the Rockies cloud-free — with the caveat that Alaska's south coast is cloudy 340 days a year. Catching the biggest state free of clouds is a rare sight.

The high-pressure system settled in during the weekend, sending temperatures soaring into the 80s and 90s Fahrenheit (between about 26 and 32 degrees Celsius) in Interior and Southern Alaska. Records started falling, especially in coastal communities that normally receive cooling ocean breezes.

Roasting 90 F days are common in interior Alaska, which has a dry, warm continental climate. But the sweltering heat is unusual for coastal communities such as Seward, Valdez and Nome. The high-pressure system is preventing ocean breezes and clouds from cooling towns such as Anchorage, Seward and Homer, which all broke high-temperature records.

The extreme heat is just the latest strange weather to hit the northernmost state this year. Just a month ago, Alaska was in the grips of record cold temperatures and late-season snowstorms.

The stagnant weather systems that caused the unusual highs and lows in April, May and June are likely random weather patterns, not tied to climate change, said James Overland, a climate scientist at the National Oceanic and Atmospheric Administration's Pacific Marine Environmental Laboratory.

But those weather patterns overlie the effects of global warming, especially in the northern third of the state, Overland said. "The northern third of Alaska is warming two to three times [faster] than the rest of the Northern Hemisphere," he told LiveScience.

Researchers are investigating how the rapid warming in the Arctic is changing weather patterns, such as by altering the jet stream. "That difference in temperature may slow all the big weather patterns down, so you're more likely to get big weather events because they have more time to build up in one location," Overland said. "The random changes in normal weather are still the most important, but we're playing with loaded dice now," Overland said.