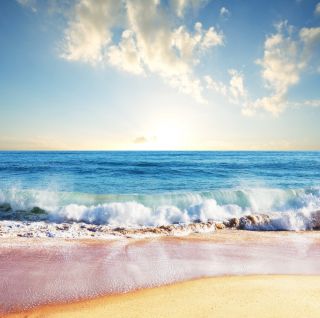 The ocean absorbs energy from the sun, stores it and then releases it slowly. Sounds like a prescription for meeting the world's energy needs, since the ocean is the largest feature of our planet. But, can it be tapped in a way that doesn't create more problems than it solves?

That's the promise behind a recently announced deal between the Lockheed Martin Corp. and Reignwood Group, a resort developer based in Beijing. The two companies will develop a 10-megawatt power plant using ocean thermal energy conversion (OTEC) technology in waters off southern China's Hainan Island. Construction is expected to be completed in 2017.

Scientists have long been interested in the potential for generating energy from the difference in temperature between warm surface waters and deep water. When that difference is large — for example, in tropical locations with narrow continental shelves — the warm water can be used to convert a liquid (like ammonia) into steam. The steam drives a turbine, producing electricity, and then is recondensed into a liquid using cold water pumped up from the deep ocean so the cycle can be repeated.  [The 10 Craziest Environmental Ideas]

The OTEC process can produce a number of benefits in addition to clean electricity. The large volumes of cold water pumped through the system can be used to cool buildings, saving on air-conditioning (and associated greenhouse gas emissions from that major energy consumer). Lots of freshwater condenses on the cold-water pipes, especially in humid, tropical environments — so much so that it can become a viable supplement to local water supplies, or even the major water source for local communities.

Because the deep-ocean water pumped up to the OTEC facility is rich in nutrients and free of pathogens, it can be used to raise fish or to grow marine organisms like microalgae for nutritional supplements. Doing that could actually reduce the environmental impact of OTEC, since the cold water is allowed to warm up while the farmed organisms remove nutrients and carbon dioxide.

Another nice thing about OTEC is that, unlike other kinds of renewable energy, power production is steady and peaks in the summer months when demand is typically highest (due to air-conditioning and refrigeration needs). Some analysts estimate that a single 100-megawatt commercial scale OTEC plant would prevent about 500,000 tons of carbon from being emitted into the atmosphere and save about $130 million per year in oil costs. Although there are environmental concerns associated with OTEC, which my co-authors and I outlined in a recent paper, the potential for clean energy, drinking water and food seem quite large.

If OTEC is so great, why has it been in development since the late 1800s but never commercialized? One reason is that there are only so many suitable sites — conventional OTEC plants need to be onshore yet close to deep water, and the surface water must be quite warm. Another reason is that the capital costs are high while the energy yield is low — the process isn't very efficient. Another reason is that it is technologically challenging to lay a pipe long enough to reach deep water — and keep it there.

Despite those challenges, scientists and engineers have remained intrigued enough with OTEC's possibilities to keep working on it for all of these decades. The potential sites have been expanded by using floating platforms, as with the plant Lockheed Martin is building, minimizing pipe length. Other innovations allow OTEC to extract energy from smaller temperature differentials. Efficiency has been increased through the use of better heat exchangers and advanced materials. Pipe manufacturing, laying methods and maintenance have all vastly improved. And, while OTEC remains quite costly, the rising price of oil has made OTEC and other forms of renewable energy much more competitive in recent years, as our paper outlines. Those factors make me think that OTEC may be on the verge of commercialization.

In fact, in our paper we concluded that the project in southern China was the missing link in commercializing OTEC. Several small OTEC plants have been built already, so we know that the concept produces net energy and all of the other benefits described above. But the costs associated with scaling up OTEC have been uncertain, perhaps scaring off potential investors and customers up till now.

OTEC is definitely not a panacea. Using large amounts of cold, nutrient-rich water from the deep ocean in order to produce energy could have some very negative impacts, like killing sea life by sucking it into the intake pipe or creating algal blooms by discharging nutrient-rich sea water into warm, nutrient-poor surface water. But, those and other impacts can be prevented or mitigated. This new industry should be carefully regulated to ensure that the costs of safe operation are internalized by beneficiaries and not borne by all of us, on behalf of the ocean.