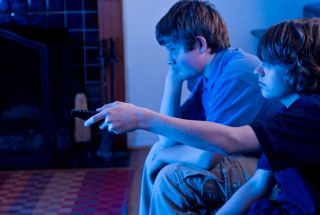 Kids eat more of a food product that has been endorsed by a celebrity, researchers report in a new study.

While that finding likely comes as no surprise to parents, the researchers also found that children eat more of an endorsed snack food when they see the celebrity on TV in a context other than an advertisement, the researchers said.

If celebrity endorsement of foods high in fat and sugar continues, and their appearances in other contexts leads to unhealthy eating, "then this would mean that the more prominent the celebrity, the more detrimental the effects on children's diets," the researchers wrote in their study, which will be published in a future issue of the Journal of Pediatrics.

Researchers at the University of Liverpool in England looked at 181 children between ages 8 and 11.  Groups of children watched a 20-minute cartoon that included one of three different commercials: one for a particular brand of potato chips endorsed by a former soccer star, one for a different snack food, and one for a toy. Another group of kids watched TV footage of the same soccer star at an event not related to the snack food.

The children were then offered two bowls of chips and allowed to eat as much as they wanted. While both contained the brand-name chips, only one was labeled with the brand name. The other was labeled "supermarket."

But the kids who watched the general footage of the celebrity also ate more of the brand-name chips, the researchers found. The soccer star in the commercial has been endorsing that brand for more than 15 years, the researchers said.

Moreover, the children did not eat any less of the "supermarket" brand chips. "Thus, the endorser effect contributed to overconsumption," the researchers wrote in their study.

The study showed "that the influence of the celebrity extended even further than expected, and prompted the children to eat the endorsed product even when they saw the celebrity outside of any actual promotion for the brand," study researcher Emma Boyland, an experimental psychologist at the university, said in a statement.

Pass it on: Celebrity endorsements may contribute to unhealthy eating in kids.