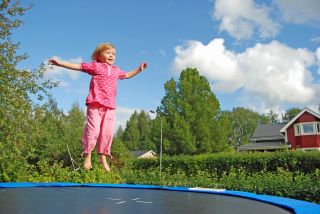 Trampolining is a dangerous activity for kids and should not be done at home, an influential group of doctors says.

The advice, announced today (Sept. 24) by the American Academy of Pediatrics (AAP), reaffirms earlier recommendations from the group regarding the use of trampolines.

In 2009, there were about 98,000 trampoline-related injuries in the U.S., resulting in 3,100 hospitalizations, according to the AAP. Although trampoline injury rates have gone down since 2004, when an estimated 111,800 injuries occurred, "the potential for severe injury remains relatively high," the AAP says.

The most common types of injuries — up to 50 percent — are to the lower extremities, including ankle sprains. Injuries to the head and neck are less common, accounting for about 10 to 17 percent of injuries, but can cause permanent neurological damage.

"Many injuries occur on the mat itself," and netting or padding don't significantly decrease the risk of injury, said Dr. Michele LaBotz, one of the authors of the new AAP policy statement. "Pediatricians need to actively discourage recreational trampoline use," LaBotz said.

Multiple people jumping on the trampoline at once increase the risk for injury, and smaller jumpers are 14 times more likely to be injured than heavier ones, the AAP says. Up to 40 percent of injuries occur from falls, and 20 percent from direct contact with the springs of the frame. Many injuries occur when an adult is watching.

Somersaults, flipping and falls put children at increased risk for injuries of the head and spine, the AAP says.

Although the rate of injury is higher among older children, younger children are more likely to experience fractures or dislocations from trampolines.

Parents who decide to have a trampoline in their home despite recommendations are advised to supervise their children on the trampoline at all times, restrict use of the trampoline to one jumper at a time, prohibit somersaults and flips, and verify that their insurance covers trampoline-related injuries, the AAP says.

Pass it on: Children should not use home trampolines.