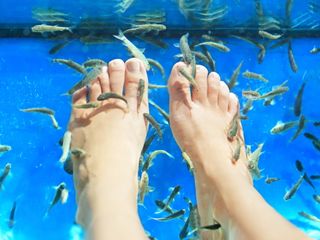 Fish that are used in trendy spa treatments to clean feet may not be so clean themselves, a new study suggests.

In "fish pedicures," the fish, called Garra rufa, exfoliate clients' feet by nibbling on them. During a session, clients immerse their feet, or sometimes their entire bodies, in water with the fish, allowing the fish to feed on dead skin for cosmetic reasons, or to control skin conditions, the researchers said.

The researchers found that supplies of these fish from Indonesia destined for spas in the United Kingdom harbored potentially harmful bacteria. The researchers intercepted and tested the fish upon their arrival at a U.K. airport.

One type of bacteria found, Vibrio vulnificus, can cause wound infections and septicemia, a condition with high mortality rates, especially among people with conditions such as liver disease, diabetes or impaired immune function, the researchers said.

Another type, called Streptococcus agalactiae, is a common cause of skin and soft tissue infections, especially in older adults and those with chronic diseases such as diabetes. Although the particular strain identified in the study does not generally cause human disease, it could evolve after repeated exposures to people, the researchers said.

There have been very few reports of people being infected with bacteria after a fish pedicure, the researchers said.

"However, our study raises some concerns over the extent that these fish, or their transport water, might harbor potential zoonotic disease pathogens of clinical relevance," the researchers wrote in the June issue of Emerging Infectious Diseases, a journal of the Centers for Disease Control and Prevention.

People with conditions such as diabetes or immunosuppression should be discouraged from undertaking these treatments, especially if they have breaks in the skin, the researchers said.

The study was conducted by researchers at the Center for Environment, Fisheries & Aquaculture Science Weymouth Laboratory, in Weymouth, United Kingdom.

Pass it on:  Fish used in "fish pedicures" may harbor harmful bacteria.