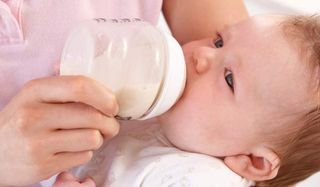 Mothers under stress may be particularly prone to over-feeding their infants, a new study suggests.

Researchers looked at moms in low-income households and found that those who experienced certain stressors, such as depression or single parenthood, were more likely to add cereal to their infants' bottles, a practice that increases the risk of weight gain in childhood.

"These findings demonstrate that stressors prevalent in low-income households…influence feeding practices likely to promote obesity," said study researcherDr. Candice Taylor Lucas, of New York University School of Medicine. "It is important to provide support for parents related to healthy feeding practices if we are to end the epidemic of childhood obesity," Lucas said.

The American Academy of Pediatrics recommends feeding babies exclusively with breast milk for the first six months of life, and advises breast-feeding continue until the baby is at least 1 year old. Putting cereal in bottles, rather than spoon-feeding it to a baby, may lead the child to consume more calories than he or she needs.

Lucas and colleagues surveyed 254 mothers in low-income, primarily Latino households. Participants were asked if they ever added cereal to bottles to help their babies sleep longer or stay full longer.

"Depression is very common in low-income mothers, and makes it more difficult to engage in beneficial parenting practices in general," Lucas said.

Mothers who were single parents, and those with said their babies had "intense emotional reactions to daily routines" were also more likely to add cereal to bottles.

The study was presented April 28 at the Pediatric Academic Societies (PAS) meeting in Boston.

Pass it on:Low income mothers who experience stressors such as depression and single parenthood may be at increased risk of over-feeding their infants.