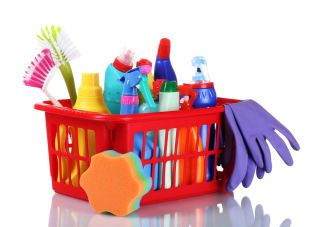 Household cleaners, including some labeled with claims such as "natural," contain chemicals that are hazardous to human health, according to a new report from the Environmental Working Group.

Research conducted by the EWG showed that household cleaning products available in the U.S. may contain compounds banned in other countries that are known to cause blindness, cancer, asthma and other serious conditions, according to a statement from the non-profit organization.

These cleaners may present severe risks to children who may ingest or spill them or breathe their fumes, according to the EWG.

Other cleaning products on the list released today — dubbed the "Cleaners Hall of Shame" — were included because they are "greenwashed," meaning that they are not as environmentally benign as they claim to be. And others neglect to list all of their ingredients, instead using vague terms such as “fragrance," the EWG said.

"Cleaning your home can come at a high price — cancer-causing chemicals in the air, an asthma attack from fumes or serious skin burns from an accidental spill,” said Jane Houlihan, EWG senior vice president for research and co-author of the list.

Among the worst offenders, according to the EWG:

Other products cited for hidden hazards:

The group has previously released other lists aimed at helping to inform consumers about the health impacts of consumer products. For example, the group annually releases a list of fruit and vegetables, called "The Dirty Dozen," that consumers are recommended to buy organic, because of relatively high concentrations of certain pesticides, and "The Clean 15" which lists the conventionally-grown (not organic) fruits and vegetables that are lowest in these chemicals.

Pass it on: The Environmental Working Group released a list today of cleaning products that it says pose a threat to human health.