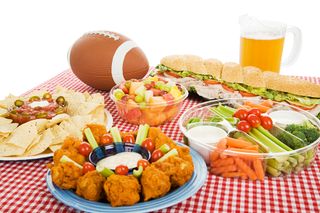 Super Bowl Sunday isn't only about football, it's about food. Lots of food.

"The more food that is available, the more people will eat," said Megan McCrory, a nutritionist at Purdue University. "And people tend to celebrate during pre-game, during the game and post game — making it an all-day event."

An estimated 48 million Americans will also order takeout or delivery food from a restaurant while watching the game this Sunday, according to the National Restaurant Association, a restaurant industry group. It predicts another 12 million people will visit restaurants or bars to watch the big game.

In fact, Super Bowl Sunday is the nation's second-largest day for food consumption, after Thanksgiving, according to the U.S. Department of Agriculture.

But McCrory noted there are also plenty of other overeating occasions, “It’s a part of our lifestyle to have social gatherings where there’s lots of food,” she said.

And for any of those occasions, there are ways to avoid overeating.

Too many calories in so little time

One option for a healthier Super Bowl Sunday is to exercise enough to burn off the extra calories.

The average person is estimated to consume about 1,200 to 3,000 calories in snacks on game day, and that's not counting the meals, according to experts. (It takes about 3,500 extra calories — above those you need — to pack on one pound of body weight, according to the U.S. Department of Health and Human Services.)

To burn 1,200 calories, McCrory said, you can walk briskly for four hours, but the exact amount of time may vary from person to person. Or, spending about two hours on the elliptical machine could burn off all those snack calories, depending on the intensity of your workout.

Come up with a game plan

Another option for people who plan to indulge on game day, McCrory said, is to plan ahead. Here are her tips:

But not everyone will be overeating this Sunday, McCrory noted.

"Some people are prone to overeat, while others aren't," she said. "We don't know why, but some research suggests it could be related to genetics or how people picked up eating habits while growing up."

Pass it on: Avoid overeating on Super Bowl Sunday with healthy choices.