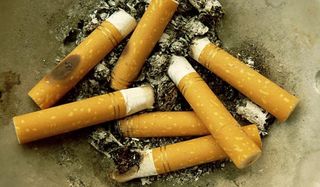 A number of lung cancer and colon cancer patients continue to smoke despite their diagnosis, a new study finds.

The study highlights the need for physicians to address smoking cessation with their patients at the time of their cancer diagnosis, experts say.

The study determined smoking rates around the time of diagnosis, and five months after diagnosis, in 5,338 lung cancer and colorectal cancer patients.

The study is published online today (Jan. 23) in the journal Cancer.

When a patient receives a cancer diagnosis, the main focus is to treat the disease. But stopping smoking after a cancer diagnosis is also important because continuing to smoke can negatively affect patients' responses to treatments, their subsequent cancer risk and, potentially, their survival, said study researcher Elyse Park, of the Massachusetts General Hospital and Harvard Medical School in Boston.

Lung cancer patients who continued smoking were more likely than those who quit to have Medicare or other public health insurance, have a lower body-mass index and have low emotional support. Those who were still smoking were also more likely to say they had smoked a high number of cigarettes per day at some point during their lives.

Colorectal cancer patients who continued to smoke tended to be male, be uninsured, have less education and say they had once smoked a high number of cigarettes per day.

"These findings can help cancer clinicians identify patients who are at risk for smoking, and guide tobacco counseling treatment development for cancer patients," Park said.

In an accompanying editorial, Dr. Carolyn Dressler, of the Arkansas Department of Health in Little Rock, noted that the study highlights the critical need for physicians and other caretakers to address tobacco cessation, particularly at the time of diagnosis.

"Most clinicians acknowledge the importance of addressing tobacco cessation in their patients; however, few do it," Dressler wrote. "We know enough now to implement effective cessation programs to identify and help cancer patients quit at the time of diagnosis and support them to prevent relapse. By doing so, we maximize patients' response to therapy, their quality of life and their longevity."

Pass it on: Because smoking can impact cancer risk and survival, patients diagnosed with cancer should quit smoking.