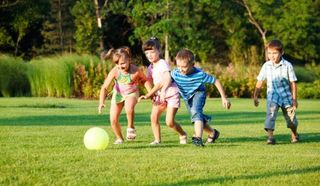 An emphasis on learning at the expense of exercise is one of several reasons why children in many day care centers are not getting enough physical activity, a new study suggests.

Concern for the children's safety is another factor in keeping them from being sufficiently active, according to the study, which noted that 19 percent of children entering school are obese.

The study was based on discussions involving 49 child care providers in the Cincinnati area.

"Values of safety, and of early education and learning, while well-intentioned, could be keeping kids sedentary," said Dr. Kristen Copeland, assistant professor of pediatrics at Cincinnati Children's Hospital, who led the study.

The findings are detailed online today (Jan. 4) in the journal Pediatrics.

Three-quarters of U.S. children ages 3 to 6 receive care outside their homes.

Previous studies found that children often remain sedentary at child care centers, with activity levels varying from center to center. Copeland and her colleagues set out to find out why. They conducted their study between August 2006 and June 2007.

The researchers recruited child care providers from 34 urban and suburban centers, including Montessori schools, Head Start programs and for-profit centers, to participate in discussion groups. All the providers but one were women, and 55 percent were African-American.

The researchers divided the participants into nine focus groups and conducted hour-and-a-half discussions about why children may not get enough physical activity at day care.  They also conducted one-on-one interviews.

After analyzing transcripts of the interviews, the researchers determined that three factors contributed to the lack of physical inactivity at the centers.

For one, the child care providers feared that children might get hurt while playing, or felt pressure from parents to keep the children from getting injured.

For another, tight budgets meant less play equipment, such as balls or jump ropes.

Third, the providers were focused on increased efforts to prepare children for the classroom, which took away from the time the kids could spend running around outside.

"Our findings should be interpreted as exploratory, not definitive," Copeland said. "There need to be future studies about how prevalent these practices are."

Dr. Russell Pate, professor of exercise science at the University of South Carolina, said, "The overriding concern is that the social norm we've created for preschools is one oriented toward preparing kids for kindergarten.

"A heavy focus on school readiness has the effect of de-emphasizing play," Pate said.

"While some are well equipped and have plenty of space to facilitate activity, a lot do not have adequate facilities," Pate said.

Many states have begun to revisit their regulations and look at the programs provided at preschools, he said, but progress is most likely on smaller scales.

"I always encourage people to think about having an impact where they can most profoundly have that impact, and that's local," Pate said.

Still, he added, "I encourage people to contact the state agency that regulates child care in their state."

Pass it on: Day cares may focus more on preventing injuries and preparing kids for school than on ensuring that kids get enough physical activity.