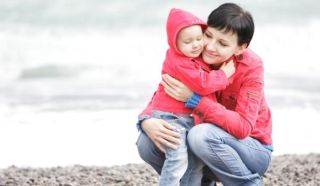 The strength of the bond between a toddler and his mother influences his likelihood of becoming obese as a teen, a new study says.

The obesity rate was more than twice as high among teens who in early childhood had poor-quality relationships with their mothers, compared with those with better relationships.

The researchers said their work suggests that areas of the brain that control emotions and responses to stress, as well as appetite and energy balance, work together to influence the likelihood that a child will be obese. Moreover, obesity-prevention efforts should include strategies to improve the mother-child bond, they said.

The study does not support that idea that mothers are to blame for children's obesity, the researchers said. Instead, "Societally, we need to think about how we can support better-quality maternal-child relationships because that could have an impact on child health," said study researcher Sarah Anderson, assistant professor of epidemiology at Ohio State University.

The findings were published online Monday (Dec. 26) in the journal Pediatrics.

The researchers analyzed data from nearly 1,000 children from nine states who had taken part in the Study of Early Child Care and Youth Development, which is a long-term study of children born in 1991. Kids were considered to be obese teenagers if at age 15 their body mass index (BMI) was among the highest 5 percent of children.

The researchers had assessed the bonds between the children and their mothers when the kids were 15-months old, 2-years old and 3-years old by watching 15-minute play sessions, and also observing the children's reactions to being briefly separated from their mothers.

The findings showed that the lower the quality of the relationship in terms of the child's emotional security and the mother's sensitivity, the higher the risk that a child would be obese at age 15 years.

The researchers rated 241 children as having a poor-quality maternal-child relationship during early childhood, and 26.1 percent of these children became obese teenagers. Among those with the highest quality relationships, the obesity rate was 13 percent.

"It is possible that childhood obesity could be influenced by interventions that try to improve the emotional bonds between mothers and children rather than focusing only on children's food intake and activity," Anderson said.

The association between early childhood experiences and teen obesity has origins in the brain, according to the study.

"Animal studies have shown that stress preferentially increasesconsumption of highly palatable foods, and eating these foods acts to calm the stress-perceiving areas of the brain," the researchers wrote in their study.

"Sensitive parenting increases the likelihood that a child will have a secure pattern of attachment and develop a healthy response to stress," Anderson said. A child's response to stress response can influence how well she sleeps and whether she eats in response to emotional distress.

Previous studies have shown that children's level of physical activity, diet, rate of maturation and the BMIs of their parents also influence their risk of obesity.

What can parents do?

Psychologists describe securely attached children as those who rely on their parents as a "safe haven," which allows them to explore their environments freely, adapt easily to new people and be comforted in stressful situations, according to the researchers. Toddlers who are insecurely attached tend to have experienced negative or unpredictable parenting and may respond to stress with extreme anger, fear or anxiety, or avoid or refuse interactions with others.

"Interventions are effective in increasing maternal sensitivity and enhancing young children's ability to regulate their emotions, but the effect of these interventions on children's obesity risk is not known, and we think it would be worth investigating," Anderson said.

Pass it on: A healthy bond with parents can reduce children's stress levels and lower their chances of later becoming obese.