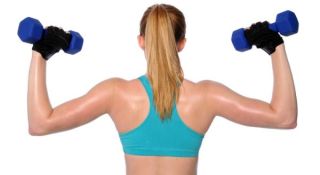 Having a buff bod may help stave off diabetes, a new study says.

The results show that the greater a person's total muscle mass, the lower their risk of insulin resistance, a precursor to Type 2 diabetes .

"This research suggests a role for maintaining fitness and building muscle," said study researcher Dr. Preethi Srikanthan, of the University of California, Los Angeles. "This is a welcome message for many overweight patients who experience difficulty in achieving weight loss, as any effort to get moving and keep fit should be seen as laudable and contributing to metabolic change."

The researchers examined the association of muscle mass with insulin resistance and blood glucose metabolism disorders in a nationally representative sample of 13,644 people over age 20. Those with higher muscle mass (relative to their body size) were more sensitive to insulin and had a lower risk of prediabetes or diabetes, the results showed.

Previous studies have shown that having very low muscle mass is a risk factor for insulin resistance, but it was not known whether increasing muscle mass to average and above average levels, independent of obesity levels, would lead to improved blood glucose regulation.

With recent dramatic increases in obesity worldwide, the prevalence of diabetes, a major source of cardiovascular complications, is expected to accelerate. Insulin resistance, which can raise blood glucose levels above the normal range, is a major factor that contributes to the development of diabetes, the researchers said.

"Our research shows that beyond monitoring changes in waist circumference or BMI, we should also be monitoring muscle mass," Srikanthan said. "Further research is needed to determine the nature and duration of exercise interventions required to improve insulin sensitivity and glucose metabolism in at-risk individuals."

The study will be published in the September issue of the Journal of Clinical Endocrinology & Metabolism.

Pass it on: Increasing your muscle mass may lower your diabetes risk.