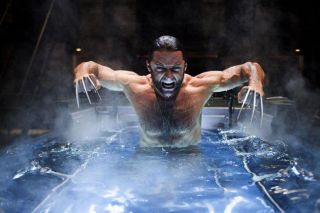 In the new movie X-Men Origins: Wolverine, we see how Wolverine (played by Hugh Jackman) becomes unstoppable. Adamantium, a rare (fictional) metal derived from meteor debris, is bonded to his biological skeleton. The metal is somehow liquefied, and then made to combine with his bones (and claws!) to create an almost invulnerable hero.

There are two main parts to this process. A strong metal is somehow liquefied and then cooled into a superhard state; in addition, this metal is bonded to organic material.

There is a way to create what are called "amorphous metals" or "glassy metals". An amorphous metal is a metallic material with a non-crystalline, disordered structure. The material is cooled at an incredibly rapid rate, locking the metal into a "glassy" state without giving crystals time to form. Recent developments in this area have produced a number of alloys with cooling rates slow enough to allow formation of amorphous structure in thick layers (over 1 millimeter); these are known as bulk metallic glasses (BMG).

In 2004, for example, several groups succeeded in producing bulk amorphous steel. The Oak Ridge group refers to their product as "glassy steel". Their material is non-magnetic at room temperature and is significantly stronger than conventional steel.

The idea that metal can be bonded or combined with organic tissue is not as science-fictional as it sounds. For example, the mandibles of leaf-cutter ants and locusts are peppered with zinc, making them stronger and more durable. Some marine worms have copper in the protein matrix that makes up their jaws.

Seung-Mo Lee and Mato Knez at the Max Planck Institute of Microstructure Physics in Halle, Germany, have been able to create super-strong spider silk using a process that sounds like it might produce a superhero - atomic layer deposition.

Lee, Knez and their team shot beams of ionized metal compounds at lengths of silk from the orb-weaving spider Araneus diatematus. As you might imagine, each silk fibre was coated in a fine metal oxide. However, some metal ions actually penetrated the silk fiber. They tried zinc, aluminum and titanium compounds, all of which improved the mechanical properties of the silk.

"With all three metals, the fibres can hold three to four times as much weight," says Knez. The fibers also become stretchier, so that their toughness - the energy needed to break a strand - rises even more. "The work needed to break the fiber rises tenfold with titanium, ninefold with aluminum and fivefold with zinc," he says.

The developers of this technique, also believe that it can be used to strengthen other biomaterials. Like bones, for example - or extendable claws. Like those of Wolverine, perhaps?