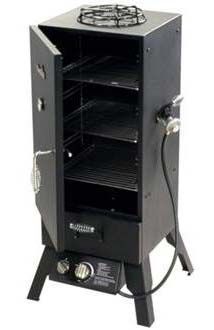 The U.S. Consumer Product Safety Commission, in cooperation with Char-Broil LLC, of Columbus, Ga., on Aug. 24 announced a voluntary recall of about 18,450 Char-Broil vertical gas smokers sold at Walmart and other stores.

Consumers should stop using recalled products immediately unless otherwise instructed, according to a statement from the CPSC. It is illegal to resell or attempt to resell a recalled consumer product, the agency notes.

Hazard: When the temperature setting is in "low," the smoker's hose/valve/regulator (HVR) assembly does not allow sufficient gas to flow, causing the flame to extinguish. Gas continues to flow and build up inside the smoker. If the smoker is reignited the build-up of propane gas can cause an explosion that bursts the smoker's door open, posing an injury hazard.

Incidents/Injuries: The company has received five reports of doors bursting open and hitting consumers. Injuries reported include burns to face and head, head concussion and cuts.

Description: This recall involves the Char-Broil vertical gas smokers with model number 07701413. The model number is printed on a metal tag located on the right rear leg of the smoker. The smoker measures 21.5" x 19.5" x 45.5" and weighs 75 pounds. A "G" inside a triangle is printed on the regulator (see photo).

Remedy: Consumers should stop using the recalled smokers and contact Char-Broil for a free replacement hose/valve/regulator assembly and installation instructions.