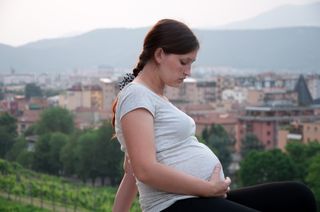 SAN FRANCISCO — Levels of a stress hormone released by the placenta could predict a woman's risk of developing postpartum depression, new research suggests.

The new findings suggest that measuring levels of the hormone, called placental corticotropin-releasing hormone (pCRH), could one day help identify women who are prone to postpartum depression before they give birth.

"Women who show high levels of this hormone prenatally are at increased risk," said study co-author Laura Glynn, a psychologist at Chapman University in Orange, Calif.

The study showed an association, not a cause-and-effect relationship, between pCRH levels and postpartum depression. Further research is needed to determine exactly how this link might work.

The study was presented Tuesday (May 21) here at the annual meeting of the American Psychiatric Association, and has not been published in a peer-reviewed journal.

The placenta, which lies within the uterus and provides nutrition to the baby, produces varying amounts of the hormone pCRH over the course of pregnancy, with a sharp rise shortly before birth. Scientists believe the hormone plays a role in timing when women deliver their babies.

"It's been called the placental clock," Glynn told LiveScience.

Women who deliver prematurely, for instance, tend to show higher levels of pCRH than those who deliver at term.

To understand how pCRH levels may be related to postpartum depression, Glynn and her colleagues measured hormone levels in the blood of 170 pregnant women at 15, 19, 25, 31 and 36 weeks of gestation. (Full-term pregnancies last 40 weeks.) The researchers also assessed the women's levels of depression at three and six months after giving birth.

Women with high levels of pCRH around the middle of their pregnancies (at 25 weeks) were more likely to be depressed three months after giving birth, compared with women whose levels were lower at midpregnancy.

The researchers didn't find a link between pCRH levels and depression at the six-month mark.

The findings could help identify women who are at risk of postpartum depression before they give birth so that health care professionals could intervene early. It can be hard for women struggling with new motherhood and depression to get help, but identifying at-risk women in the earlier stages of their pregnancies could make it easier for doctors to help.

It’s especially important to identify the risk early on because postpartum depression can have lasting effects.

"Not only is mom suffering, but her suffering is going to influence the development of the infant in a pretty profound way," Glynn said.

Glynn isn't exactly sure why high pCRH levels might predict the risk of depression, but she said it could be because some women's hormonal systems take longer to return to their prepregnant states.