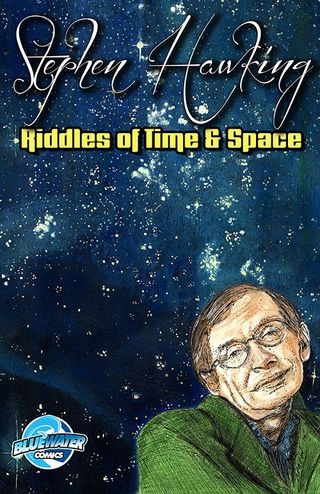 A new comic book gets its action from the tremendous ideas of cosmologist Stephen Hawking.
(Image: © Bluewater)

Living legend Stephen Hawking has already achieved superhero status in the eyes of many science geeks, and now his ideas are being honored in comic book form.

"Stephen Hawking: Riddles of Time & Space" (Bluewater) details the life story of the physicist, from his early days at Cambridge and struggles with a body-wrecking disease to his academic achievements and current fame.

Hawking, 71, is widely considered one of the greatest scientific minds since Albert Einstein, and he has greatly enriched our understanding of the universe over the past several decades. His work with fellow cosmologist Roger Penrose helped unite Einstein's general theory of relativity and quantum theory. Hawking also studied black holes, with a groundbreaking theory that the cosmic monsters do actually emit a faint glimmer of radiation. [The 10 Best Time-Traveling Heroes of All Time]

But his life has been marked by physical challenges. At age 21, Hawking was diagnosed with the motor neuron disease called amyotrophic lateral sclerosis (ALS), also known as Lou Gehrig's disease. The disease eventually robbed him of his mobility and later his ability to speak; today, Hawking uses a speech-generating device controlled by the muscles in his cheek.

"The very concept of making an engaging comic book where the protagonist is essentially immobile is a pretty tall order, but I think the key to us keeping it exciting was being able to get inside his mind (one of the greatest of our time) and show some of his most abstract concepts in a visual and dynamic way," artist Zach Bassett said in a statement.

One page detailing Hawking's ideas about black holes puts the scientist into conversation with Einstein, picturing him as Michelangelo's Adam reaching out to Einstein as God.

"Additionally, we got several chances to tip our hat to many famous artistic icons of pop culture, as well as famous people that he's met, taken inspiration from or even inspired himself," Bassett added. Hawking has been featured on "Star Trek: The Next Generation," "The Simpsons," "Futurama" and "The Big Bang Theory."

"The most surprising thing about Stephen Hawking is his razor wire wit that is sometimes withering and other times matched with a puckish sense of humor," the comic book's writers, Michael Lent and Brian McCarthy, said in a statement.

The scientist is indeed prone to pithy comments. Lent and McCarthy said their favorite Hawking quote is: "I have noticed that even people who claim everything is predetermined and that we can do nothing to change it, look before they cross the road."

The comic was released on April 21 and is also available as an e-book.