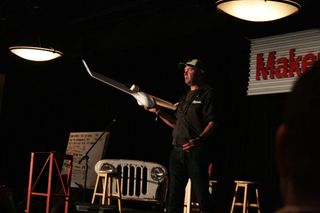 Chris Anderson talks to an audience at Maker Faire Bay Area on May 18, 2013, about how small foam drones could revolutionize farming.
(Image: © Tia Ghose)

SAN MATEO, Calif. — The word "drone" tends to conjure up images of planes that kill terrorists or of creepy surveillance tools.

But tiny drone airplanes made of foam may be more useful in rural environments, one researcher says. There, the fliers could revolutionize agriculture, reducing the need for pesticides and improving crop production.

Because drones can fly cheaply at a low altitude, they can get highly detailed images of cropland, said Chris Anderson, the CEO of 3D Robotics and former editor-in-chief of Wired, here on Saturday (May 18) at this year's Maker Faire Bay Area, a two-day celebration of DIY science, technology and engineering. Drone-captured close-ups of fields could help farmers tailor their pesticide treatment and identify subtle differences in soil productivity. [Rise of the Drones: Photos of Unmanned Aircraft]

The automation of farming has led to fewer farmers tending massive plots of land. That means they don't know how each leaf looks, notice changes in the height of plants, or the color of soil

"Once upon a time farms were small and people could walk the farm," Anderson said. Now, however, "farms are too big to measure and too big to manage."

As a result, farmers may not know about the condition of vast stretches of their land and make many decisions as if plots of land were uniform. For instance, they may blanket their entire crop with fungicide in June because fungal infections typically strike in July, whether or not their crop is actually afflicted, Anderson said.

Drones provide a potential solution to this problem because they can provide high-resolution images of crops, are cheap to make and can fly unregulated over private lands, Anderson said.

Anderson is developing tiny, foam drone airplanes that fly using a $170 autopilot — essentially a brain for the plane — that works in any kind of automated vehicle. Because the drones fly low to the ground, they can use cheap point-and-shoot technology to take pictures, instead of the costly equipment that enables satellite imagery.

In addition, drones can store ultra-precise GPS coordinates for each picture they take. That information allows the planes to stitch pictures together more accurately, getting a better image of what's happening on the ground.

One possible application is to pinpoint damage to crops early on. Early signs of plant damage show up in chlorophyll, the energy-making machinery. This damage changes how the plant appears in infrared and near-infrared images, which could be captured in drone airplane imagery.

More precise imagery could also allow farmers to target pesticides just to the plants that need them, reducing how much ends up in the food supply, Anderson said.

Drones could also be used by vineyards to make better wines, by identifying patches of soil with richer moisture content. Then the owners of vineyards could have greater control over the wines they produced by sorting grapes based on the soil in which they grew, Anderson said.