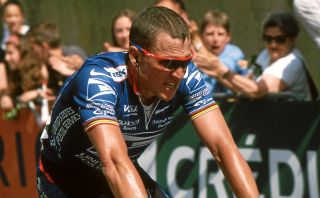 If doping were legal, Lance Armstrong would get to keep his seven Tour de France gold medals. But then again, who knows if he would have won them in the first place. In an alternate reality in which cyclists were free to use whatever substances and however much of them they pleased, victory might go to the elite competitor who was willing to adopt the most extreme (and dangerous) performance-enhancing drug regimen. Would Lance have what it takes?

Amid the revelations about Armstrong and his teammates’ years of cheating the system — a system of drug testing which, in the words of Forbes sports writer Chris Smith, is "clearly not working" — some pundits argue that the time has come to legalize doping. They contend that shameless drug use all around would level the playing field far more effectively than spotty testing did.

"Not only would the playing field suddenly be even for all players, it would be at a higher level," Smith wrote. "A huge part of watching sports is witnessing the very peak of human athletic ability, and legalizing performance-enhancing drugs would only help athletes climb even higher."

Perhaps the fans would get a better show, as Smith suggests. But would ending the war on doping really make life easier for athletes?

Probably not. Although the laws don't prevent all doping from happening, studies show that they do rein it in. Without the moderating effect of the fear of getting caught, dangerous levels of doping would be expected to grow more prevalent in many sports. Athletes' current choice between cheating or losing might be replaced with an even more dire choice between perilous levels of drug use, or losing. [The Tricky Case of Caster Semenya]

Here's how the anti-doping laws dampen drug use: According to the United States Anti-Doping Agency, Lance Armstrong and his teammates artificially increased their red blood cell counts (and thus, the oxygen delivery to their muscles) through transfusions and by doping their blood with erythropoietin (EPO), a naturally-occurring hormone that builds red blood cells. Dr. Michael Ashenden, a former, independent member of an International Cycling Union (UCI) panel, explained at Velo News that cyclists like Armstrong get away with blood doping by ensuring that their red blood cell counts never fluctuate suspiciously far from some average value, which is taken to be their natural level. (News reports also suggest the team members took testosterone and would physically hide from drug testers.)

The average person's proportion of red blood cells, measured by "packed cell volume" (PCV), is around 44 percent. The PCV for many top cyclists — possible due to a genetic predisposition, training at high altitudes, or widespread doping — is around 50 percent. According to a 2000 paper by New Zealand physiologist Will Hopkins, a common test-evasion tactic among cyclists is to use EPO to elevate their PCV to 52 percent, and then, if faced with a drug test, dilute their blood by injecting saline into their veins, thus bringing their PVC back down to the average level. In other words, the possibility of tests forces them to keep their PCV within a syringe's reach of "normal." [How Did Armstrong Get Busted?]

But when there are no tests, as was the case before these tests were instituted, some athletes will elevate their PCV levels significantly higher. And because red blood cells make blood thicker, this is very dangerous. According to a 2004 article in the British Journal of Sports Medicine, a PCV of 51 percent or higher dramatically increases a person's risk of stroke and heart attack.

"In the early 1990s, after EPO doping gained popularity, but before tests for its presence were available, several Dutch cyclists died in their sleep due to inexplicable cardiac arrest. This has been attributed to high levels of EPO doping," wrote Julian Savulescu, chair of practical ethics at Oxford University, and his colleagues. "The risks from raising an athlete's PCV too high are real and serious."

Savulescu and colleagues advocate legalizing blood doping, but protecting athletes by setting an upper limit on the PCV they may maintain during competition.

Drugs of choice may vary from sport to sport, but the game remains the same, according to some experts. Dick Pound, former International Olympic Committee vice president and former president of the World Anti-Doping Agency, estimates that a mere 20 percent of the dopers who were drug-tested at the London Olympics were actually caught. The majority used drugs at undetectable levels, or ones with chemical structures that had been tweaked beyond recognition. As Pound put it in a CNN interview, "If you're a sophisticated doper and you test positive, you fail two tests: a drugs test and an IQ test."

With testosterone, for example, athletes are allowed up to four times the average level, to account for natural variations between humans. The latest technique of pushing this allowable limit, Pound said, is to "inject a pellet into their butt, which will slow-release small doses of testosterone but won't go over the threshold." [How Powerful Is Willpower?]

As with blood doping in endurance sports, unbridled use of testosterone and similar drugs would boost performances beyond the realm of natural human variations in sports requiring brute strength. Consider baseball. According to 2007 research by Tufts University physicist Roger Tobin, a 10 percent increase in muscle mass through the use of anabolic steroids (which mimic the muscle-building effects of testosterone) translates into a 4 percent increase in the speed of a batted ball. That sounds marginal, but with all home runs happening at the margins, Tobin said the small speed boost increases home-run production by anywhere from 50 to 100 percent. He suspects the steroid factor explains the sudden rise in home runs in the mid-1990s; the surge died down when the league began testing baseball players for steroids in the 2000s.

Some observers cite the decline in baseball ratings in the "post-steroid era" as further evidence that steroids are good for sports. But as with blood doping, runaway steroid use comes with major health risks for players, ranging from decreased fertility to cardiac sudden death.