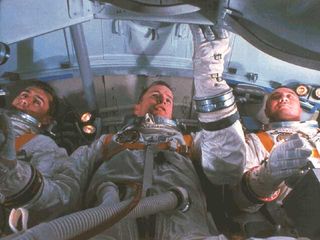 During a preflight test Jan. 27, 1967, tragedy struck the Apollo 1 mission when a fire inside the space capsule caused the death of the three astronauts slated to travel to the moon.  The event changed spacecraft design forever.

President John. F. Kennedy had announced that by the end of the 1960’s the country would send a man to the moon and bring him back safely. The space race was heating up and NASA had already achieved human spaceflight in the Gemini and Mercury missions.

Apollo 1 was to be the first manned mission of the moon landing program, designed to test out the setup by orbiting Earth. The launch date was slated to be Feb. 21, 1967 with three experienced crew members — Command Pilot Virgil "Gus" Grissom, Senior Pilot Edward H. White and Pilot Roger B. Chaffee.

All three were inside the Saturn IB vehicle during a launch simulation when sparks ignited a flame. The high-pressure pure oxygen environment fanned the flames and the crew struggled to get out of the capsule. Flammable foam pads and nylon netting spread the fire to the cockpit and communication was lost. The hatch door, which was meant to keep the astronauts safely inside during spaceflight, was too hard to open due to internal pressure.

Technicians struggled to open the hatch door and attempted to put out the fire but were unable to do so before all three crew members were dead. Damaged wires were found to be the cause of Apollo 1 fire.

The tragedy was a big blow to NASA and subsequent investigations led to major changes in the design of the lunar module. The hatch door was improved to be easily opened in an emergency, flammables were removed and the pure oxygen atmosphere was replaced with an oxygen-nitrogen mixture. The crew members who perished are remembered at several memorials and a patch from their project was even left on the moon by the 1969 Apollo 11 spaceflight.