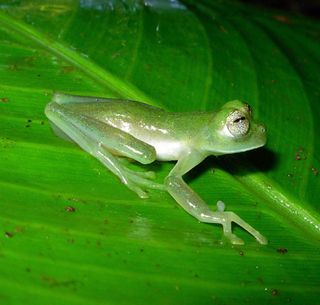 A glass frog of the Nymphargus genus potentially new to science discovered in the mountains of the Darien in Colombia. Darien is a mountainous system isolated from the Andes Mountain range and is a recognized for its high biological diversity.
(Image: © © Conservation International-Colombia/Photo by Marco Rada)

Ireland is not known for its wildlife, as much of it was wiped out in the Ice Age. But the single species of frog that lives on the Emerald Isle apparently toughed it out during that extreme climate event while the same type of frog back on the British mainland retreated.

Research by scientists at the Zoological Society of London (ZSL) and Queen Mary, University of London, suggests that so-called common frogs (Rana temporaria) on Ireland survived by hanging out in a small ice-free refuge there, while those in Britain hit the high road. Frogs from mainland Europe repopulated Britain once the Ice Age was over, about 10,000 years ago, said Amber Teacher from the ZSL, who headed up the research. Her findings, detailed online on Jan. 21 in the journal Heredity, suggest the Irish refuge allowed amphibians to wait out the worst of the cold and ice. The result is based on genetic differences found among common frogs in mainland Britain and Ireland. "It appears that some frogs may have survived through the glaciations in this ice-free part of Ireland, as there is a distinct genetic lineage found in the South of Ireland that is not found elsewhere in Europe," Teacher said. "So within Ireland, we can find frogs that originate from this small part of southern Ireland, mixed with the frogs that came from Western Europe to repopulate the British Isles after the ice age retreated." The work was conducted with the help of the Irish Peatlands Conservation Council and Froglife, a UK wildlife charity for amphibians and reptiles. Other wildlife facts about Ireland (which is about the size of the state of Illinois): it has no native land snakes or turtles, and only one species of native lizard. But there are plenty of badgers, rabbits and foxes.