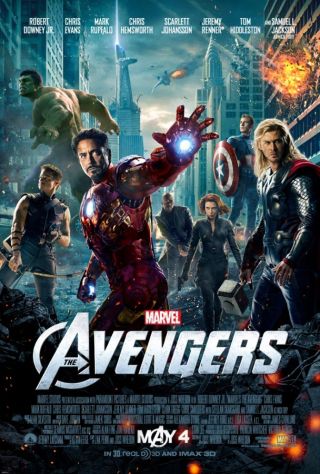 The fiction world has long been full of cool science and technology that eventually sneaks its way into real life. Flip phones, for example, were dreamed up on "Star Trek" long before they made it to market. Comic books are no different. "The Avengers," in which Marvel’s greatest superheroes join forces to conquer world-threatening evil, hits the big screen today (May 4).

It turns out that besting a supervillain requires bending a few rules of physics. Here are some of the amazing feats of physics to check out while you’re watching:

Captain America harnesses the power of "Vibranium," a metal extracted from a meteorite that crashed in Africa. The shield is capable of absorbing, storing and redirecting kinetic energy, and the material becomes more powerful as more weapons are turned against it. In the movie, Captain America redirects a shot from Iron Man’s repulsor ray into a bunch of Chitauri warriors sneaking up on Iron Man.

“The property that lends Vibranium its remarkable characteristics is its ability to store or channel energy in its atomic structure,” said Suveen Mathaudhu, a program manager in the materials science division of the U.S. Army Research Office. He recently contributed to a Journal of Materials story on the science of the Avengers. Scientists have yet to find a material that gets tougher the more it gets knocked around, but battlefield materials are getting increasingly better at dissipating impact energy.

The Norse god Thor is able to summon lightning by wielding Mjolnir, his trusty enchanted hammer. Thor can channel the storm’s fury into devastating energy blasts that can destroy even secondary Adamantium. In real life, companies are tinkering with artificial lightning. Applied Energetics, a company that develops lasers and particle beam systems, has built a lightning gun that can stall cars or defuse roadside bombs.

In the movie, shape-shifting Chitauri aliens are wirelessly powered by their mothership. While wireless powering (especially for something so big) remains difficult and inefficient for non-super beings, many researchers, including a group at the Massachusetts Institute of Technology, are working to make this a reality. The most common form of wireless power transmission — for example, the consumer devices that can charge cellphones — use direct induction followed by resonant magnetic induction, but other methods under consideration include electromagnetic radiation in the form of microwaves or lasers.

“One thing we can learn is that many, many science fiction heroes are scientists and engineers who use their innovative scientific discoveries to support or lend them their super-characteristics,” Mathaudhu said. Iron Man (alias Tony Stark) is a prime example. Iron Man’s armored suits give him superhuman strength and durability, flight, repulsors and the unibeam projector. They also have energy shields, an electromagnetic pulse generator, arm-mounted cannons and projectile launchers, various tools like a drill or detachable hip lasers, and can absorb and release energy. In real life, exoskeletons developed for military purposes have been shown to support soldiers as they run at speeds of up to 10 mph while lugging 200 extra pounds of gear.

Even a demigod like Loki needed a scientist (astrophysicist Dr. Erik Selvig) to build a device to open up an inter-dimensional portal. “Scientists often [think in a way] that is predisposed to the limitations of the current physical world. However, science fiction has no such constraints and thus can stimulate creativity and innovation in unique ways. In the fictional world, they are not limited to the technology of today, and are free to image the extreme possibilities of science and materials, which often become realities in the real world in the future,” Mathaudhu said.

In fact, Einsteinian physics do provide hints at how transport through wormholes might be achieved. By current standards, such portals seem wildly unlikely, but no more so than an evil Norse god waging war against a team of superheros.