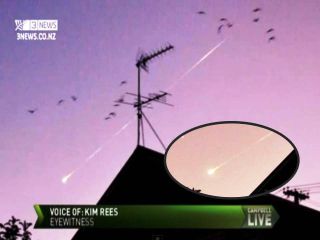 A rare daytime fireball in Texas, briefly taken as a case of mistaken identity, has now been re-elevated to its original status. A large meteor really did streak across the noon sky in Texas on April 2, bright enough to be visible during the day as it burned up while screaming through Earth's atmosphere.

Thousands of people in and around San Antonio reported seeing the great ball of fire; one eyewitness described it as looking like "a little piece of the sun falling." However, when a local news station attempted to illustrate what a fireball (an especially bright meteor) looks like, it erroneously aired footage of a jet contrail. This led many experts to believe it was actual footage of the event and that, despite the eyewitness accounts, there was never a fireball at all — merely a passing jet glimmering in the sun, and a case of mistaken identity.

However, the American Meteor Society recorded numerous reports of the daytime fireball in Texas at approximately 11:50 a.m. Central Time. According to Bill Cooke, head of NASA's Meteoroid Environment Office, these reports describe an actual meteor, not the erroneous and unrelated footage of a jet contrail aired on WOAI News.

"The video was of a jet contrail, but there WAS an actual daytime fireball over Texas on [April 2]. Two different things happening at about the same time, which always leads to confusion," Cooke told Life's Little Mysteries.

Adding to the confusion is the fact that there was another daytime fireball on the same day in New Zealand. This is unusual because there are typically only one of two such events on Earth in an entire year, Cooke said. As originally reported by Life's Little Mysteries, these fireballs would have had to be at least one yard across to burn brightly enough to be visible during the day.

Scientists do not yet understand why fireballs are more common during the spring than other times of year. "I can tell you a lot of the bright and slow fireballs appear to be coming from the direction opposite the sun, but they have not much in common other than that," Cooke said. "You see a lot more ordinary meteors in the fall, but the spring seems to have the big slow movers — the ones that are really impressive."

Cooke and his colleagues are collecting data with a "smart meteor camera network" in order to map the sources of falling space rocks from different parts of the sky and eventually understand more about their origins.