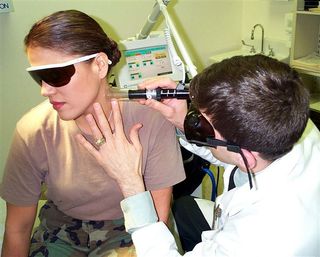 Tattoo being removed from a Navy officer's neck.
(Image: © Department of Defense/Rudi Williams)

Bitterly regret getting that cartoon character carved into your calf on your 18th birthday? Don't feel quite as passionate about Betty or Bill as you used to? All is not lost. Tattoo removal is possible, and here's how it's done.

Years ago, when your ill-advised tat was being rendered, the tattoo artist used an electric tattoo machine to insert pigment into the dermal layer of your skin by rapidly and repeatedly rupturing your skin's top layer. The more evenly this was done, the easier it is to remove the pigment later, as it will all be located at the same depth.

Since the 1980s, lasers — beams of high-intensity, single-color light — have been the standard tools used for tattoo removal, because they offer a bloodless, low risk, effective method with minimal side effects. Removal procedures are done on an outpatient basis, usually over the course of a series of visits. Patients may or may not require topical or local anesthesia.

According to Discovery Fit & Health, the type of laser used to remove a tattoo depends on its pigment colors. (And if you're unsure whether you'll want to remove a tattoo you're planning to get, opt for dark ink: Yellow and green are the hardest pigments to remove; blue and black are the easiest.) [Are 'I Love Mom' Tattoos Still Popular?]

Lasers remove tattoo ink by delivering short pulses of intense light that pass harmlessly through the top layers of skin and get absorbed by the tattoo pigment below. The energy from this laser light causes the pigment to break down into small particles that can then be removed by your body's immune system. The healthier, better hydrated, and more well-rested you are, the better job your immune system will do clearing away these fragmented pigment particles.

No mistake shall go completely unpunished, however. Tattoo removal hurts a little. The impact of the laser pulses has been described as similar to hot specks of bacon grease splashing on your skin, or having a thin rubber band snapped againt your arm. Furthermore, it requires several laser treatments separated by three week interims to remove an average-size tattoo. After each treatment, your skin will be sensitive and may form a scab. In the weeks following the procedure, the pigment in the treated area gradually fades.