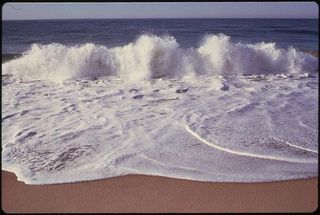 To understand why waves don't neatly adhere to received wisdom, you have to follow them to their source. Contrary to another widespread fallacy, the formation of waves has nothing to do with the moon (unlike the rise and fall of the tide). The ocean surface waves that we see rolling onto the beach are caused by one thing: wind.

As wind drags over a stretch of ocean, it pulls up ripples and slants on the sea surface. These irregularities become exaggerated as they get steeper and even more receptive to wind drag, rising like sails that magically grow new fabric as they collect more wind. And because waves come from such a capricious progenitor as wind, their subsequent motions, interactions and properties are similarly hard to predict. Robert Guza, a professor at University of San Diego's Scripps Institution of Oceanography who thinks deeply about waves, puts it this way: You wouldn't expect waves to [have regular properties], given that they're generated by sort of turning on a wind eggbeater. [Why Do Seashells Sound Like the Ocean? ]

The seven-wave maxim does get something right, though. Although waves have chaotic origins, once a few of them get going, they do tend to settle into traveling groups. Choppy, irregular waves that are generated in stormy regions and head off in the same direction will reach a kind of compromise as they go, bucking and engulfing each other until they organize into somewhat stable and predictable packs.

As it turns out, the farther these wave groups travel from their source, the more likely they are to fall into a relatively predictable sequence, usually one with a long wavelength or distance between two consecutive crests. Chances are that a long, rolling swell coveted by surfers as it reaches shore was born in a far-off ocean storm before breaking away from the clutter of short-wavelength disturbances at the storm's center. (In oceanographic terms, a "swell" is a series of waves that has outlasted the winds that formed it.)

When you narrow the focus to just these unusually coherent and far-reaching wave caravans that humans tend to look out for, the seven-wave theory starts to hold a little more water. According to Fabrice Veron, the director of physical ocean science and engineering at the University of Delaware, the sort of swells we are likely to observe on a fair-weather day at the beach will commonly arrive in groups of 12 to 16 waves. That range, coupled with the tendency of wave groups to bundle their tallest waves in the center of the pack, provides a possible basis for the seven-wave claim.

Veron offered this explanation: A group will 'modulate' the wave amplitude; it's like another long wave on top. So the first wave in a group is tiny, the next one is bigger and so on until you get the biggest one in the middle of the group. Then they get smaller again. The last one is tiny, so the biggest wave in the group is in the middle, and if there are 14 waves in a group, the seventh wave is the biggest.