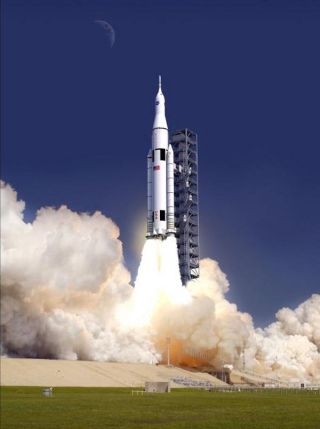 NASA has just unveiled the design of its new Space Launch System, involving a heavy-lift rocket that will allow astronauts and scientists to explore deeper into space than ever. How will the SLS work?

One major difference between the SLS and the predecessor used for America's space shuttles is the new launch system's heavy reliance on liquid propellants. Solid propellants, while cheaper, usually have less energy content. Also, they cannot be stopped once lit, which can be problematic if a launch goes awry.

The core stage of the SLS will employ five of the RS-25D/E main engines that had been used to launch the space shuttles, fueled by liquid hydrogen and liquid oxygen. The second, or upper, stage of the rocket will be powered by a J2X engine an advanced version of the second-stage engine of the Saturn V rockets used to launch the Apollo missions . The J2X, which also will use liquid hydrogen and liquid oxygen, is currently in development.

When the new craft lifts off, it will fire the RS-25D/E engines along with booster rockets that are strapped on the outside. NASA plans to use solid booster rockets for initial tests, but may soon replace them with new boosters that employ advanced technology and use either solid or liquid boosters (depending on performance and cost). The upper stage of the rocket fires once the vehicle reaches higher altitudes, where there is little atmospheric pressure.

The exact design of the rocket's mechanics and fuel mixtures aren't yet known, but here are the basics behind launching a rocket with liquid propellants .