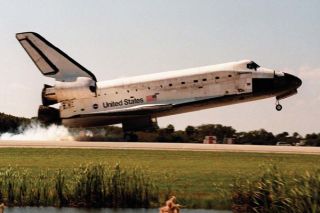 Orbiter Discovery touches down on runway 33 at KSC
(Image: © NASA)

The Space Shuttle Atlantis will land at Kennedy Space Center (KSC) in Florida tomorrow (July 21). For the flight crew and mission control team, this is no easy task: It requires the careful completion of a series of precisely-timed steps.

Preparation starts 4 hours before touchdown, when the shuttle is orbiting at an altitude of more than 200 miles (322 km). Crewmembers begin to configure the onboard computers for entry, as well as the hydraulic system that powers the shuttle's "aerosurfaces" its wing flaps and rudder.

An hour later, the payload bay doors are closed. Mission Control gives the shuttle commander (in the case of STS-135, astronaut Chris Ferguson) the go-ahead to initiate Ops 3, the portion of the orbiter's flight control software that manages entry and landing.

At 2 hours before landing, the astronauts don their orange spacesuits and strap themselves into their seats. An hour later, the shuttle cruises into position at 175 miles (282 km) above Earth, and on the opposite side of it from KSC. At this point, soaring at a speed of 16,465 mph (26,498 kph), it undergoes the "deorbit burn," flipping around and firing its engines against its direction of motion. This slows the shuttle down for atmospheric reentry.

Thirty minutes later, when the shuttle hits the atmosphere at an altitude of 76 miles (122 km), the craft's engine is off; for reentry, it flies like a glider, relying first on steering jets at the back of the vehicle and later on its aerosurfaces to control the airflow around it. As it descends, the orbiter performs a series of four steep banks, rolling over as much as 80 degrees to one side, then the other. This swaying motion gives the shuttle's landing trajectory an elongated "S" shape.

Despite the efforts to decelerate, the shuttle still shoots through the atmosphere faster than the speed of sound. Its sonic boom the sound of the compressed air coming off the shuttle's nose and wing can be heard across parts of Florida as two distinct claps in quick succession.

At 5 minutes before landing, the shuttle ducks below the sound barrier, slowing past a speed of 768 mph (1236 kph). At this point it is just 25 miles from the runway. At that time and place tomorrow, Commander Ferguson will take manual control of the vehicle.

Ferguson's task is quite different than a commercial airline pilot's: First, he lowers the shuttle toward the runway 20 times faster than an airplane typically descends. The shuttle also drops seven times more steeply, beginning its descent with its nose angled downward at 19 degrees. At 2,000 feet (610 meters) in the air, the commander sharply raises the nose and slows the rate of descent. The vehicle touches down at 214 to 226 miles per hour, back wheels first. The nose then touches down, the drag parachute is deployed, and the shuttle cruises to a stop.