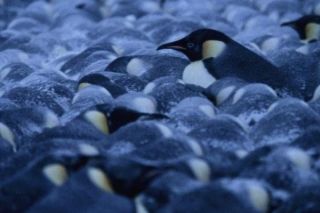 Penguins in a colony pack extremely tightly together, but still shuffle around without crushing anyone.
(Image: © March of the Penguins (National Geographic film))

For penguins trying to survive a harsh Antarctic winter, huddling is a matter of life or death. Birds within a colony crowd together so tightly that individual movements are impossible. Collective movements are a must, however: The penguins on the periphery would die of cold if they weren't continuously being reshuffled toward the center of the crowd.

But how does this constant, collective reorganization happen? How does a huddle of millions shuffle itself without crushing anyone? Physics, as it turns out. Penguins move through the huddle in the same way that sound waves propagate through a fluid only much more slowly.

"Every 30 to 60 seconds, all penguins make small steps that travel as a wave through the entire huddle," writes Daniel Zitterbart, a physicist at the University of Erlangen-Nuremberg in Germany, who wrote the new research paper along with his colleagues in the journal PLoS ONE.

In a highly coordinated manner, the emperor penguins the researchers studied each took miniscule steps measuring just 2 to 4 inches (5 to 10 centimeters). "Over time, these small movements lead to large-scale reorganization of the huddle," they wrote. [Read: Why Don't Penguin Feet Freeze On Ice? ]

The traveling wave of small steps is similar to how a sound wave travels through a fluid, the researchers noted. "In general, individual penguins do not change their position relative to their neighbors, and they do not force their way in or out of a huddle."

Penguins are much better at "going with the flow" than humans, who also tend to move in waves when packed together in large, dense crowds, but sometimes end up getting crushed. "Why these waves are uncoordinated, turbulent and dangerous in a human crowd but not in a penguin huddle remains an open question," Zitterbart and his colleagues wrote.