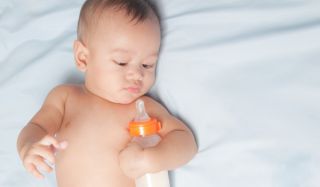 There are several reasons why a mother may choose to bottle-feed her baby instead, as breastfeeding and formula both pose their own unique challenges and conveniences.
(Image: © Surabky | Dreamstime)

Virtually nobody has memories from very early childhood but it's not because we don't retain information as young children. Rather, it may be because at that age, our brains don't yet function in a way that bundles information into the complex neural patterns that we know as memories.

It's clear that young children do remember facts in the moment such as who their parents are, or that one must say "please" before mom will give you candy. This is called "semantic memory."

Until sometime between the ages two and four, however, children lack "episodic memory" -- memory regarding the details of a specific event. Such memories are stored in several parts of the brain's surface, or "cortex." For example, memory of sound is processed in the auditory cortexes, on the sides of the brain, while visual memory is managed by the visual cortex, at the back. A region of the brain called the hippocampus ties all the scattered pieces together.

"If you think of your cortex as a flower bed, there are flowers all across the top of your head," said Patricia Bauer of Emory University in Atlanta. "The hippocampus, tucked very neatly in the middle of your brain, is responsible for pulling those all together and tying them in a bouquet." The memory is the bouquet -- the neural pattern of linkages between the parts of the brain where a memory is stored.

So why do kids usually fail to record specific episodes until the two-to-four age range? It may be because that's when the hippocampus starts tying fragments of information together, said psychologist Nora Newcombe of Temple University in Philadelphia.

And there may be a reason for this, Newcombe said. Episodic memory may be unnecessarily complex at a time when a child is just learning how the world works.

"I think the primary goal of the first two years is to acquire semantic knowledge and from that point of view, episodic memory might actually be a distraction," Newcombe said. Can Bad Memories Be Erased?