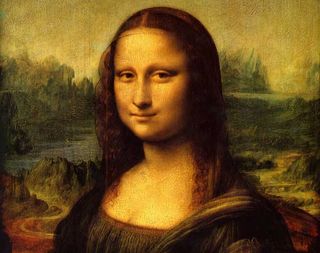 Like a chapter straight out of the popular book "The Da Vinci Code," art historians have found microscopic codes hidden within the eye of the charmingly mystifying painting.

More than 500 years old, Leonardo da Vinci's masterpiece has been viewed firsthand by a countless number of people. But it wasn't until magnified, high resolution images of the painting were studied by members of Italy's National Committee for Cultural Heritage that the codes were discovered, The Telegraph reports.

"To the naked eye the symbols are not visible but with a magnifying glass they can clearly be seen," Silvano Vinceti, president of the Committee, told The Telegraph.

Although difficult to make out because of the painting's age, the hidden symbols in the Mona Lisa's left eye appear to be letters and numbers, with a possible CE or B, according to Vinceti. The committee members found that the right eye contains the letters LV, which they theorize could stand for Leonardo Da Vinci's name.

Vinceti added that the arch of the bridge in the background contains the number 72, but that it could also be an L and the number 2.

"It's remarkable that no one has noticed these symbols before," Vinceti said, "and from the preliminary investigations we have carried out we are confident they are not a mistake and were put there by the artist."