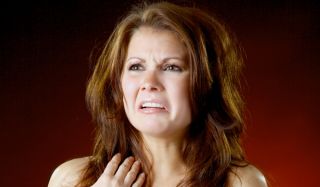 Seeing a stranger's tissue dripping with yellow snot might make you squirm, but this image doesn't even crack the top three on the gross scale. People universally find other images much more disgusting.

To determine just what is the grossest sight, Valerie Curtis, the Director of the Hygiene Center at the London School of Hygiene & and Tropical Medicine devised a truly gruesome experiment. Curtis and a team of researchers presented 20 images of things perceived as repulsive to more than 80,000 individuals from 172 countries in a Web-based survey [take the disgust questionnaire for yourself here]. The images included photos of skin abrasions, bugs such as wasps, lice and worms, and a soup bowl full of what looked like a bodily fluid . (Along with the images were a few blank white pages as controls.)

[CLICK HERE FOR IMAGES: The most disgusting images in the world are too gross to spring on you without warning. Follow this link if you think you can stomach them.]

Participants were asked "How would you feel about touching this?" and rated their level of disgust on a scale of 1 (not disgusting) to 5 (very disgusting) as they viewed each image.

The photo that finished highest in the "gross-out" ratings was of a person's gums infested with live fly larvae, receiving close to a perfect score of 5. A festering wound came in second place, with a rating of 4.6.

"Disgust is designed by evolution to keep us away from parasites that may make us sick, so people pick up on, and are most disgusted by, visual representations of a parasite invasion, such an open, festering wound," Curtis told Life's Little Mysteries. "The photo of the gums infected with maggots is the clearest representation of a parasite invasion. The image acts as a warning that this individual poses a clear disease threat, and people instinctively want to avoid that."

To test that theory, Curtis' survey also included seven pairs of images, with each pair including one image evoking disease. For example, an image of a plate seemingly full of bodily fluids was paired with an image of another plate of viscous fluid, but this one containing a blue chemical dye. Because blue rarely occurs in nature and was never associated with disease threats in our evolutionary past, Curtis explained, we have no reason to find it disgusting. The results bore that out: The blue dish ranked as the less-disgusting.

Another pair consisted of two photos of a healthy man, with one of them digitally altered to make him look sickly, sweaty and with red rash patches on his skin. The "ill" photo was rated as more than twice as disgusting as his regular photo. Similarly, an image of a clean surface skin burn that looked nearly identical to the festering rated a full point lower, at 3.6.

Overall, more than 98 percent of participants considered the disease-relevant images equally or more disgusting than their corresponding pairs. These results, Curtis said, confirm her belief that the things we find the grossest are the things that humans, over thousands of years of evolution, have learned can cause disease . The type of disgust that makes your stomach contents wander into your throat has evolved to serve good hygiene and help you to avoid getting sick.

"People run from the risk of getting an infection, but because what causes infection is invisible, we go by cues that tell us to stay away from things or situations that could make us sick," Curtis said. "That is why a full train was rated as more disgusting than an empty train because being in a crowded place can increase a person's chances of catching a disease."