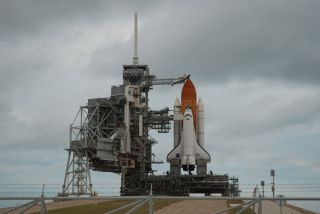 On Launch Pad 39A at NASA's Kennedy Space Center in Florida, space shuttle Discovery waits for rain clouds to pass and the weather to improve so it can launch on its final mission.
(Image: © collectSPACE.com)

CAPE CANAVERAL, Fla. Launching a space shuttle is a joint feat of science and engineering, but even with all the preparation in the world, NASA also needs Mother Nature to play nice in order to get the craft off the ground.

NASA has a well-defined set of launch weather guidelines that help mission management teams decide when it is potentially unsafe to attempt a launch. Detailed weather patterns are provided by the U.S. Air Force Range Weather Operations Facility at Cape Canaveral in the days leading up to the scheduled liftoff at Kennedy Space Center in Florida. [GRAPHIC: NASA's Space Shuttle From Top to Bottom]

Approximately nine hours prior to a launch, shuttle technicians begin the three-hour-long process of filling the orbiter's massive external fuel tank with cryogenic propellant. Although clear weather is ideal for tanking, the process can still be carried out safely and effectively in cloudy or rainy conditions. A weather-related delay during fueling can result in the postponement of a launch as well, but NASA officials have a few hours of cushion time in which a delayed tanking can be resumed and completed for an on-time launch attempt later that day.

Fueling will not go forward, however, if there are high winds present or threats of lightning in the area.

"Rain doesn't hurt the system, but lightning is not okay," NASA spokesman Allard Beutel told Life's Little Mysteries. "Lightning is the main concern more often we get delays or scrubs because of lightning in the area."

And that's the ultimate problem with thick clouds. The space shuttle's fuel tanks might carry an electric charge that could attract a bolt of lightning as the spacecraft passes through the clouds. A direct hit on the orbiter or the fuel tanks would be catastrophic, but a bolt that passes even close to the shuttle could damage the sensitive electronics that astronauts need to pilot the shuttle, run life-support systems, and keep in touch with Earth. (This is true of all airliners, but the risk is greater for the shuttle because it flies higher in the atmosphere where the more dangerous types of clouds exist.)

For this reason, decisions to launch the space shuttle are much more sensitive to weather considerations, and forecasts provided to the space agency are broadly conservative as an added safety precaution. The shuttle will not launch if there is precipitation, low clouds or high winds at the launch pad or along the flight path. Lightning on the launch pad or lightning forecast to occur within 10 nautical miles of the pad or the flight path in the 30 minutes prior to launch will also shut down a launch.

Clear weather is also critical in the event of a contingency Return To Launch Site (RTLS) abort situation shortly after liftoff. Similarly, a decision to go through with a launch must also take into consideration the weather conditions at the agency's various emergency landing sites in the U.S. and overseas.

"Most, but not all, of it has to do with emergency landing in the unlikely event that we have to return here to Kennedy," Beutel said. "We have to preserve that as one of the emergency landing options. And that does change things, because you're not just worrying about launch time, but also 20 minutes later when, in theory, you might need to return to landing site."

But, because weather projections are never 100 percent accurate, NASA officials also employ the so-called "Good Sense Rule," which states: "Even when launch constraints are not violated, if any other hazardous conditions exist, the launch weather officer will report the threat to the launch director. The launch director may hold at any time based on the instability of the weather."